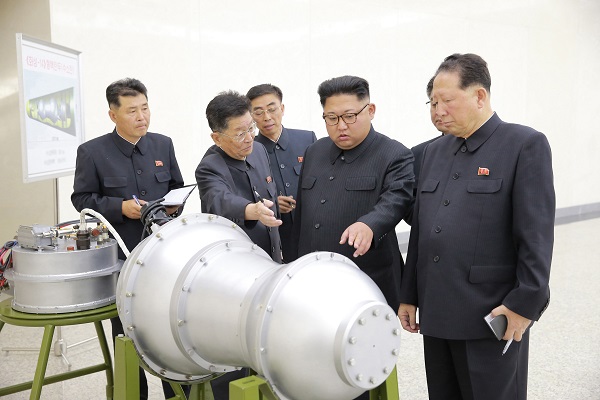 An undated image distributed on Sunday by the North Korean government shows North Korean leader Kim Jong-un at an undisclosed location. North Korea’s state media on Sunday said Kim inspected the loading of a hydrogen bomb into a new intercontinental ballistic missile, a claim to technological mastery that some outside experts will doubt but that will raise already high worries on the Korean Peninsula. [AP/YONHAP]

A 6.3-magnitude explosion was detected within one kilometer (0.6 miles) of North Korea’s nuclear test site early Sunday afternoon, just hours after the regime claimed it had developed a hydrogen bomb that could be mounted atop an intercontinental ballistic missile.

The event took place at 12:30 p.m., or exactly noon North Korean time, according to the United States Geological Survey.

The South Korean Joint Chiefs of Staff said the “artificial earthquake” originated from Punggye-ri Nuclear Test Site in Kilju County, North Hamgyong Province, adding that it appeared to be the regime’s sixth nuclear test, though declining to officially confirm this.

China’s Earthquake Administration also measured the magnitude of the event at 6.3, calling it a “suspected explosion.”
South Korean President Moon Jae-in ordered a National Security Council meeting to be held at 1:30 p.m. at the Blue House.

Earlier Sunday, North Korean leader Kim Jong-un had inspected the Nuclear Weapons Institute and watched what was reported to be a hydrogen bomb being loaded onto a new intercontinental ballistic missile, according to the state-run Korean Central News Agency (KCNA).

“The H-bomb, the explosive power of which is adjustable from tens kiloton to hundreds kiloton,” read an English dispatch of the KCNA report, “is a multi-functional thermonuclear nuke with great destructive power which can be detonated even at high altitudes for super-powerful EMP [electromagnetic pulse] attack according to strategic goals.”

The report added that Kim stressed the need for the institute’s scientists to “dynamically conduct the campaign for successfully concluding the final-stage research and development for perfecting the state nuclear force.”