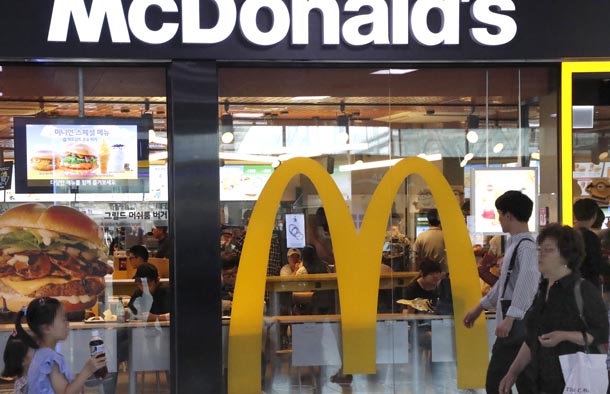 McDonald’s Korea halted selling bulgogi burgers nationwide starting on Saturday. Korea Centers for Disease Control and Prevention is conducting an epidemiological investigation into a case in which seven children and one adult showed symptoms of food poisoning with vomiting and diarrhea after eating McDonald’s hamburgers on Aug. 25 at a Jeonju branch in North Jeolla. [YONHAP]

Korea Centers for Disease Control and Prevention is conducting an epidemiological investigation into a case of seven children and one adult who showed symptoms of food poisoning with vomiting and diarrhea after eating McDonald’s hamburgers on Aug. 25 at a Jeonju branch in North Jeolla.

Authorities are not ruling out the possibility that the eight individuals contracted hemolytic-uremic syndrome (HUS), widely known as “hamburger disease,” a bacterial infection that can leave the renal system severely damaged.

Many cases are caused by E. coli, which can be found in undercooked meat like hamburgers. Children under the age of five are particularly vulnerable since their immune systems are not fully developed.

On Aug. 25, a group of 15 adults and elementary school students from the same church in Jeonju visited McDonald’s Jeonju branch and ate bulgogi burgers together.

A day later, seven kids and one adult experienced diarrhea and vomiting. The authorities declared an epidemiological probe into the case on Saturday.

On its website, a notice says, “We have decided to stop selling bulgogi burgers pending the outcome of the ongoing investigation by authorities,” adding that the multinational company’s Korean branch was taking the issue seriously.

It also said the company will do its best to help patients recover, though without elaborating on how or when.

The outcome of the ongoing probe is expected to be made public around Wednesday.

The case in Jeonju is not the only incident that the corporation, which has 440 branches in Korea alone, has recently found itself in.

In July, the mother of a 5-year-old girl filed a complaint claiming irreparable harm was done to her child because of the fast food chain’s mismanagement of its food products.

Choi Eun-ju, the mother, claims her daughter contracted HUS after eating a Happy Meal in September of last year. Choi’s daughter now must undergo nine hours of peritoneal dialysis on a daily basis.

McDonald’s Korea branch also received a complaint from the parents of a 2-year-old girl, who began to have diarrhea and bloody excrement after eating a hamburger patty on May 17 at a Jamsil branch in southern Seoul.

On May 19, the child was admitted to a local emergency room. The child’s condition improved and she was discharged later that day.