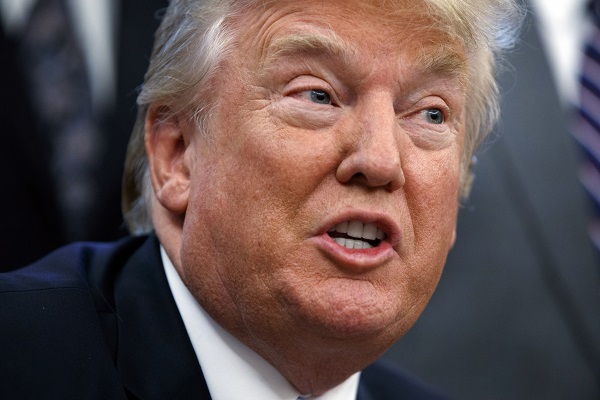 In a series of tweets following North Korea’s most powerful nuclear test to date from its Punggye-ri test site in Kilju County, North Hamgyong Province, Trump wrote Sunday: "The United States is considering, in addition to other options, stopping all trade with any country doing business with North Korea.”

His remarks seemed to target China, which accounts for some 90 percent of North Korea’s trade. Trump has been pressuring Beijing to do more to rein in Pyongyang.

The total U.S. goods and services traded with China was an estimated $648.2 billion in 2016, according to the Office of the U.S. Trade Representative. China is the United States’ largest goods trading partner. Exports from the U.S. to China totaled $115.8 billion last year, and imports $462.8 billion.

The president also tweeted: “North Korea is a rogue nation which has become a great threat and embarrassment to China, which is trying to help but with little success."

He continued: “Their words and actions continue to be very hostile and dangerous to the United States.”
Trump also took a jab at Seoul, tweeting that South Korea’s “talk of appeasement with North Korea will not work.”

Defense Secretary Jim Mattis and chief of staff Gen. John Kelly.
"Our commitment among the allies is ironclad,” Defense Secretary Mattis told reporters at the White House after the NSC meeting. “Any threat to the United States or its territories, including Guam, or our allies, will be met with a massive military response — a response both effective and overwhelming.”

“We are not looking to the total annihilation of a country, namely North Korea,” Mattis underscored, adding, “but as I said, we have many options to do so.”

U.S. Treasury Secretary Steven Mnuchin, also a member of the White House NSC, called for North Korea’s economy to be cut off, warning of additional secondary sanctions that would block individuals or firms that do business with Pyongyang from business with the United States.

So-called “secondary boycotts” are a means for Washington to apply targeted economic pressure on companies or financial institutions in countries with ties to North Korea by denying them access to the U.S. market and financial system.

He said Washington will work with its allies and China, adding, “People need to cut off North Korea, economically. This is unacceptable behavior.”

When asked to elaborate Washington would take a much tougher stance with Chinese financial institutions and companies, Mnuchin said, “We’re going to strongly consider everything at this point.”

To a question on whether a tipping point has been reached and if Washington is closer to a military response, Mnuchin replied that Trump “has made it clear this is not the time for just talk, this is the time for action,” putting all options on the table.

“My focus right now, working with the president… is to make sure we put additional economic sanctions,” he added. “China has a lot of trade with them; there is a lot we can do to cut them off economically – much more than we've done already.”

The U.S. Treasury in June imposed secondary sanctions on the Bank of Dandong along with a Chinese shipping company and two individuals with alleged illicit financial ties to North Korea, denying them access to the U.S. financial system.

Republican Sen. Bob Corker of Tennessee, chairman of the Senate Committee on Foreign Relations, said in a statement, “We stand ready to work with the administration to support a comprehensive strategy that not only places an emphasis on deterrence but also empowers our allies and partners in the region, who must do far more to confront this threat.”

Corker said he had spoken earlier with White House chief of staff Gen. John Kelly as Trump and his national security team assessed the situation in North Korea and communicated with its regional partners.

"It certainly underscores the heightened importance of getting China to work with us much more aggressively to cut off trade to North Korea," said Democratic Rep. Adam Schiff of California said on CNN's "State of the Union” on Sunday “I think we're going to have to start imposing secondary sanctions, that is, [on] other countries doing business with North Korea."

He added, "We ought to be aiming for a cessation of these programs in the first instance, and then hope that will lead to a negotiation where we can roll back these programs.”

The remaining cards left to pressure the Pyongyang without resorting to a military option include Washington’s further secondary sanctions on Chinese financial institutions and firms, or the halting of oil supplies to the North at the UN Security Council level – which was not included in its latest resolution on Pyongyang.

The council could also consider banning the North Korea’s state-run Air Koryo as well as its textile exports and blocking North Koreans from working abroad to earn money for the regime, according to diplomatic sources.

The UN Security Council was scheduled to convene an emergency meeting Monday morning in New York at the request of members of the council United States, Japan, the United Kingdom and France, as well as South Korea.

The international community has also quickly stepped up to respond to the North’s test of what it claimed to be an advanced hydrogen bomb, and German Chancellor Angela Merkel said that the issue can only be solved with U.S. President Trump’s involvement.

"I don't think we can solve this without the U.S. President,” Merkel said during a televised debate ahead of Germany’s federal election, “but we will only consider a peaceful, diplomatic solution.”

Merkel and French President Emmanuel Macron expressed support for a tightening of European Union sanctions against North Korea in a statement Sunday following a phone conversation.

U.K. Foreign Secretary Boris Johnson likewise warned against Trump’s rhetoric, stating “none of the military options are good.” He said the distance between North Korea and Seoul is very small and that “they could basically vaporize large parts of the South Korean population even with conventional weapons.”

He pointed out that North Korea “only has six months of oil supplies left” and added, “There is scope to continue to put pressure on the regime.”

The Chinese Foreign Ministry said Beijing will continue to comprehensively implement UN sanctions against Pyongyang.
President Moon Jae-in and Japanese Prime Minister Shinzo Abe held a 20-minute phone conversation Monday and agreed on tougher and more substantive measures, sharing that the nuclear test was a “serious provocation” at a different level from before, according to Blue House spokesman Park Soo-hyun.

Top nuclear envoy Kim Hong-kyun, special representative for Korean Peninsula peace and security affairs, spoke over the phone with his U.S. and Japanese counterparts, Joseph Yun and Kenji Kanasugi, in a show of trilateral cooperation and agreed to push for a UNSC resolution with the “strongest sanctions elements,” said the Korean Foreign Ministry Monday.