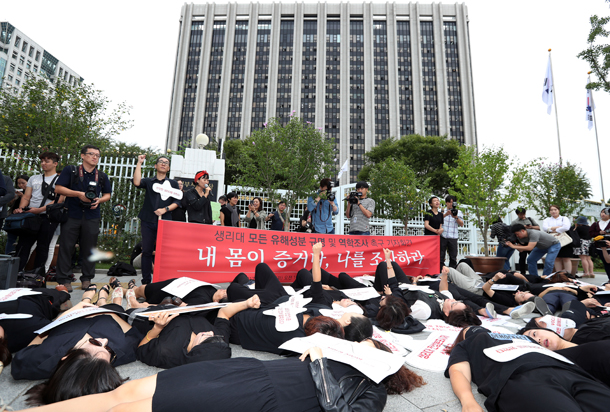 Members of the Korean Women’s Environmental Network hold a die-in on Tuesday in front of the Central Government Complex in central Seoul. The civic group urged the Ministry of Food and Drug Safety to test for all substances in sanitary pads. [YONHAP]

As consumer concerns over the safety of sanitary pads continues to rise, the Ministry of Food and Drug Safety and the Korean Women’s Environmental Network disagree over the authenticity of the test results that initially provoked the controversy.

The civic group threw a press conference and a die-in, a protest similar to a sit-in where protesters pretend to be dead in order to draw attention to potential health risks, on Tuesday in front of the government complex in central Seoul. The civic group urged the ministry to run an investigation on every component found in sanitary pads and an epidemiological survey to verify the relationship between disposable sanitary pads and health issues.

The civic group claimed that government tests on menstruation-related products are not extensive enough.

“Apart from volatile organic compounds (VOCs), foreign research papers also mention substances like dioxin, furan, pesticide residue [sprayed on cotton] and synthetic perfume as substances that can to be found in disposable sanitary pads,” the association said in a statement Tuesday.

The group also criticized the government for never having run a comprehensive substance test on sanitary products in the past until the recent controversy, calling it an act of neglect despite the fact that it is a daily necessity that many women have used for more than 40 years.

Last week, the Ministry of Food and Drug Safety said it would test for a total of 86 VOCs.

VOCs are chemicals that are naturally released from products at room temperature and some of them are dangerous to the human body, such as benzene and trichloroethylene which are toxins that can cause cancer.

The Ministry of Food and Drug Safety Monday cast doubt on Professor Kim’s research and said in a press release that it “is not specific and was not based on an objective research method that was cross-verified among researchers.”

It also added that consumers should wait for the ministry’s test results, as “the mere fact of having found VOCs in the products does not determine whether it is definitely harmful to the human body.” Test results for 10 VOCs will be released this month. The results for the additional 76 VOCs will come later this year.

Kim, who was present at the Tuesday press conference, rebutted the claims.

“The method used for the research is a combination of three approaches acknowledged by the International Organization for Standardization, which are already used in industries like car components and construction material,” he said, adding that he is willing to participate in an open discussion with the ministry to resolve any questions they have on his test methods.