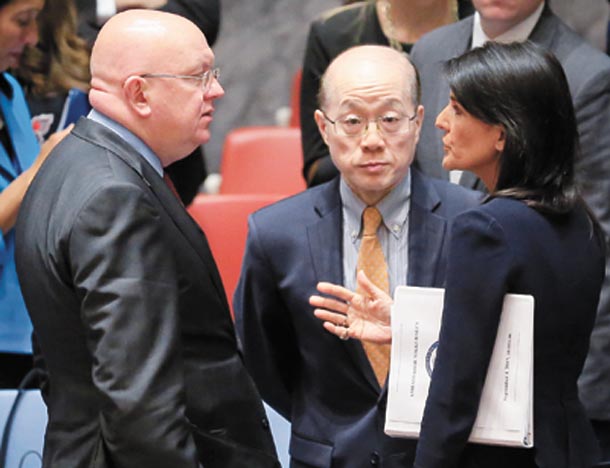 Washington is pushing for the “strongest possible” sanctions resolution from the United Nations Security Council over North Korea’s sixth nuclear test, which may be voted on as early as next week.

The United States wants North Korea’s oil supplies to be cut off.

U.S. Ambassador to the United Nations Nikki Haley said that North Korea wanted to be recognized as a nuclear power but warned that leader Kim Jong-un was “begging for war,” during an emergency meeting of the UN Security Council Monday.

“Enough is enough,” said Haley, who stressed that the stakes could not be higher. “We must now adopt the strongest possible measures.” She added that the past 24 years of sanctions was “not enough.”

The 15-member council gathered to condemn the North’s underground nuclear test Sunday and discussed options to de-escalate tensions on the Korean Peninsula. This marked the second emergency meeting of the Security Council on North Korea within a week, and the 10th this year.

“War is never something the United States wants,” she said. “We don’t want it now but our country’s patience is not unlimited.”

She said the United States would be circulating a draft resolution the coming week with the aim of having a vote next Monday. Haley called on the council to move quickly due to the “urgency of the situation.”

Diplomats have indicated the United States has been circulating a draft resolution among member states. While its contents have not been confirmed, the draft that is being proposed by the United States is seen to be asking to cut off the oil supply to North Korea, which would be effective only if China concurs. China accounts for some 90 percent of North Korea’s fuel imports. But Beijing has resisted such a move in the past, fearing it may be crippling for the regime, and would not likely consent to a complete oil embargo on the North.

U.S. President Donald Trump has threatened to halt “all trade with any country doing business with North Korea,” forecasting possible secondary sanctions on China, a permanent member of the council.

The possibility of U.S. secondary sanctions targeting Chinese companies or financial institutions in countries with ties to North Korea and denying them access to the U.S. market and financial system is seen as a means of pressuring Beijing to agree to some sort of partial oil ban on the North.

During the meeting, however, Chinese Ambassador to the UN Liu Jieyi reiterated a call for all sides to return to negotiations, calling for the issue to be resolved peacefully, adding, “China will never allow chaos and war to erupt on the peninsula.”

He went onto emphasize China and Russia’s joint initiative for a peace mechanism, which would require Pyongyang to suspend its nuclear program for a halt in Seoul and Washington’s joint military exercises - a plan the United States has rejected.

Russian Ambassador to the UN Vassily Nebenzia likewise said that a military solution would not solve the issue and stressed that “a comprehensives settlement could be arrived at solely through political and diplomatic means,” including by leveraging the mediation offices of the United Nations secretary general.

But Haley called the idea of a so-called freeze-for-freeze “insulting,” and said that “when a rogue regime has a nuclear weapon and an ICBM pointed at you, you do not take steps to lower your guard.”

Washington and Beijing will have to come to some sort of consensus on a draft over the upcoming week for a vote next week to happen.

An oil embargo has been suggested in the past but has not been included in previous sanctions resolutions on the North, including the one last month in response to the North’s two intercontinental ballistic missile launches in July. South Korean Ambassador to the UN Cho Tae-yul said to the council that a new resolution must include not only additional measures to further block funds that could possibly flow into the country’s illegal weapons of mass destruction program, but also include “truly biting and robust measures,” such as “cutting off crude oil and oil-product supplies.”

In Seoul, South Korean Minister of Foreign Affairs Kang Kyung-wha likewise told the National Assembly Foreign Affairs Committee Tuesday that a halt in oil supplies to the North is “one of the important elements” being discussed in the UN Security Council.

She continued, “It remains to be seen what sort of wording will be agreed upon.