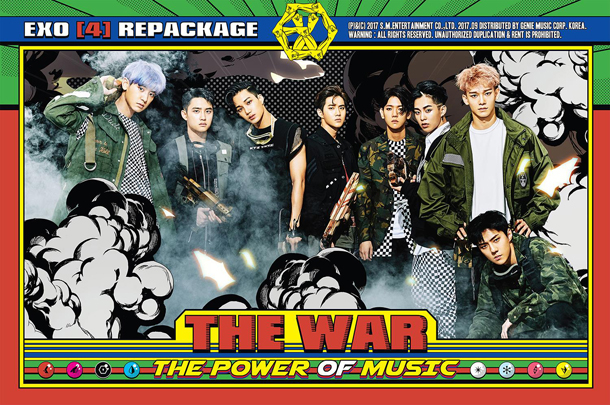 Boy band Exo’s repackaged edition of its hit album “The War” conquered Apple iTunes album charts in over 30 countries, according to its agency Wednesday.

Exo’s “The War: The Power of Music,” released on Tuesday, climbed to the No. 1 spot on 33 iTunes album charts, including in Spain, Japan, Indonesia, Russia and Hong Kong as of Wednesday, S.M. Entertainment said.

The album also made it to the top 10 on the iTunes charts in the U.S., Canada, Australia, Britain and France.

The repackaged album includes the new title track “Power,” plus “Sweet Lies” and “Boomerang,” along with the original nine songs from “The War” released in July.

“The War” sold over 1 million copies in less than a month after its release and became the boy band’s fourth “million seller.”