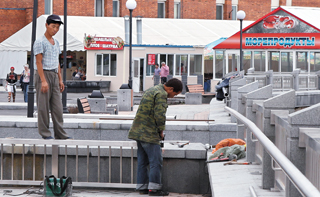 A North Korean laborer, a source of foreign currency for the regime, at a construction site in Russia. [JOONGANG PHOTO]

Washington is pushing for new UN Security Council sanctions on Pyongyang and is expected to also urge a ban of North Korea’s overseas workers, a source of foreign currency for the cash-strapped regime.

More than 50,000 North Koreans workers operate abroad, according to a 2015 report submitted to the United Nations by Marzuki Darusman, special rapporteur on human rights in North Korea, earning the regime between $1.2 billion and $2.3 billion per year.

“It is time for the United Nations Security Council to seriously consider an oil embargo,” President Moon Jae-in told Russian President Vladimir Putin in a phone call Monday, ahead of their summit, “and a plan to fundamentally cut Pyongyang’s source of foreign currency, such as a ban on the import of North Korean laborers.”

U.S. Ambassador to the United Nations Nikki Haley called for the UN Security Council to “adopt the strongest possible measures.” The United States is circulating a draft resolution that calls for cutting off fuel to North Korea as well as banning overseas workers, and hopes to put it to a vote next Monday. 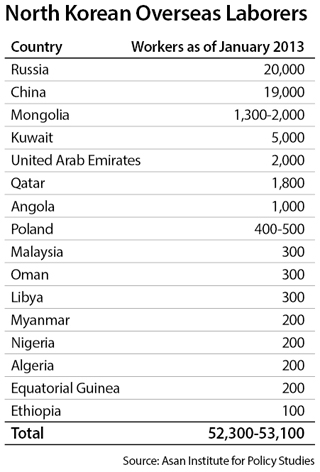 “Do we think more sanctions are going to work on North Korea? Not necessarily,” U.S. Ambassador Haley told the Washington-based American Enterprise Institute think tank Wednesday. “But what does it do? It cuts off the revenue that allows them to build ballistic missiles.”

This state-sponsored system of overseas laborers, which offers a way to circumvent UN sanctions, operates mostly in China and Russia, though they are scattered worldwide in countries including Mongolia, Kuwait, the United Arab Emirates, Libya and Poland.

One such worker, a North Korean man in his 20s surnamed Choe, was sent to Kuwait in December 2004. He heard that he could earn $100 per month overseas, applied for the position and passed a written exam with the ruling Workers’ Party’s external construction general bureau. But he only received monthly receipts for $100, as part of a deferred payment system.

Every day, he worked for 14 hours, starting at 5 a.m., for over a year, but he was unable to pocket any of his wages. When he protested and said he wanted to return home, a North Korean official in charge of on-site management put him in confinement. He was only released when he agreed to dock the cost of his plane flight home from his wages.

When he could not meet the output levels, or if he was sick and could not work, his pay was deducted. Similarly, the cost of his flight to Kuwait was deducted from his wages. His situation was documented by the Database Center for North Korean Human Rights (NKDB), a Seoul-based non-governmental organization, which collected witness reports and testimonies.

These overseas laborers are often employed in mining, logging, textile and construction industries and can earn wages on average of $120 to $150 per month under inadequate health and safety conditions, oftentimes with insufficient daily food rations, according to Darusman’s report. According to a 2013 report compiled by the Asan Institute for Policy Studies, Russia had 20,000 North Korean workers at the time, while China had 19,000.

A North Korea source said, however, there may be as many as 100,000 North Korean overseas workers, adding, “With the toughening of sanctions by the international community, starting from last year, North Korea increased the amount workers are expected to pay authorities by two to three times and is employing all sorts of methods for compulsory collection.”

The source continued, “In order to meet such demands, there are situations where laborers are taking on part-time jobs in addition to their regular jobs overseas.”

And the cash earned by these laborers is often funneled into the North Korean ruling Workers’ Party’s Office 39, a secretive bureau that manages slush funds and generates revenue for the leadership, also known as Room 39 or Bureau 39.

Some 90 percent of the wages of North Korean overseas laborers goes to the North Korean agency that employs them “under the pretext of covering the cost of lodging and food,” while only 10 percent goes to the actual worker, said an NKDB analyst, citing accounts of witnesses.

The laborers also function as a means of transferring foreign currency for the regime, as the UN Security Council prohibits the transfer of bulk cash that can be used for the North’s weapons of mass destruction program. The laborers, who on average work around three years overseas, often carry the cash back into the country.

Following North Korea’s fourth nuclear test in January 2016 and the implementation of UN Security Council Resolution 2270 in March of that year, North Korea faced more obstacles to its financial transactions and in turn resorted to relying more heavily on its overseas workers for cash transfers.

In June, a North Korean laborer in Russia was caught by customs officials hiding about $25,000 in his bag to take back to North Korea at the Vladivostok International Airport. A similar case took place in March, when another worker was caught trying to sneak out $33,000. UNSC Resolution 2371, passed on Aug. 5, bans the hiring and paying of additional North Korean laborers used to generate foreign export earnings. However, Seoul, Washington and Tokyo are looking for stronger measures on the overseas laborer issue in a new resolution.

According to an Asan Institute report from 2014, North Korean overseas laborers work on average 12 to 16 hours a day and get about one day off a month.