‘Comfort woman’ finds a voice in ‘I Can Speak’

‘Comfort woman’ finds a voice in ‘I Can Speak’ 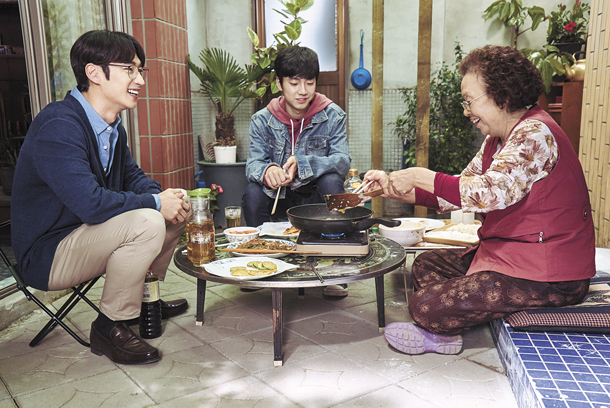 This month, two movies touching on women who were forced into sexual slavery by Japanese soldiers during World War II, euphemistically referred to as “comfort women,” are slated to hit theaters. One is “Spirits’ Homecoming, Unfinished Story,” a sequel to last year’s “Spirits’ Homecoming,” and the other is the heartwarming drama “I Can Speak.”

Ahead of the release later this month, the “I Can Speak” director and stars discussed the movie at a recent press conference.

The movie, laced with humor, revolves around a public official named Park Min-jae (Lee Je-hoon) and a grumbling grandmother named Na Ok-bun (Na Muni), who bothers district office officials every day with complaints on even trivial matters. Though the two do not have a good start, they develop a close relationship when Min-jae begins teaching English to Ok-bun, and learns of Ok-bun’s painful past as a comfort woman and the motivation that drives her to study so hard.

“The more I learned, the more pain I felt, so I felt that [I could not study the issue more deeply,] which was an excuse,” said director Kim Hyun-seok on Wednesday.

The director added, “The pain of the grandmother in the film is depicted very briefly. Instead of focusing on comfort women’s painful past, I wanted to portray the perspectives that we have of grandmothers [like Ok-bun].”

“Instead of attempting roles based on my own desires or out of personal interests, I thought I would be more grateful if I could deliver something as an actor,” said Lee about his role.

Na expressed excitement over starring in the movie in a lead role. “Playing a main role at my age, nobody can understand how it feels until they have reached my age,” said the 75-year-old veteran actress who also starred in “Miss Granny” (2014).

The movie will be released on Sept. 21.