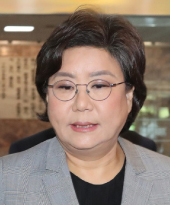 The embattled leader of the minor opposition Bareun Party stepped down Thursday over a graft scandal that threatened to derail the party’s efforts to reform conservative politics.

Lee Hye-hoon faces a prosecutorial probe over allegations that a businesswoman gave cash and gifts worth about 60 million won ($53,022) to her over nearly a dozen occasions from October 2015 to March this year. Lee flatly denies it.

“I apologize for causing concern due to my failure to fulfill the heavy responsibility as a leader of the opposition party focusing on security and people’s livelihoods,” she said during a meeting with party lawmakers.

The economist-turned-politician, however, claimed her innocence, saying she would “uncover the truth” during the prosecution’s probe.

The scandal dealt a major blow to the party’s drive for “new, transparent and warm” conservatism and fueled discussions for its possible merger with the main opposition Liberty Korea Party, from which it splintered off amid a factional feud late last year.

Lee took the helm of the party in June, vowing to make it the “main base” of conservatism in a complete break from the conservatives once affiliated with corruption-tainted former President Park Geun-hye.