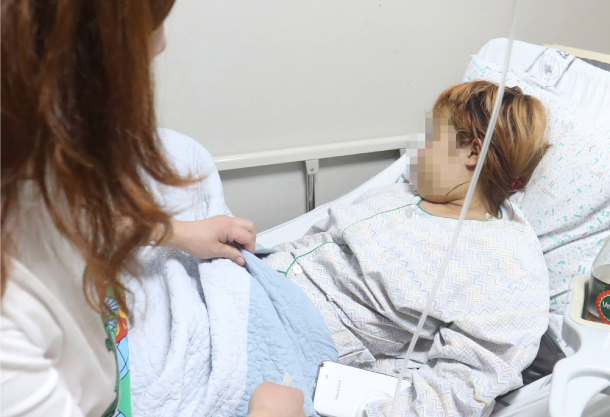 A brutal gang attack of a 14-year-old girl in Busan has rocked the country, inspiring more than 240,000 people to sign a petition on the Blue House website for stiffer punishment against Korean teens, who likely face more legal leniency. The victim is now hospitalized, receiving medical treatment for serious scars on her head and bruises all over her body. [YONHAP]

Three more teenagers have been booked in the brutal Busan gang attack of a 14-year-old girl, police said Thursday, bringing the total number of suspects to seven.

All three are female, two are 15 years old and the third is 14. They face allegations of beating the victim on the night of Sept. 1 in an alley of the city’s Saha District for an hour and a half with construction materials, glass bottles and a chair, along with four other suspects - three 14-year-olds and one 13-year-old.

The other four were booked earlier this week on charges of group assault and revenge attack. Police requested a pre-trial detention warrant for two 14-year-olds on Wednesday, while the others have been booked without physical detention.

The three most recent suspects joined the two girls, for whom police applied a warrant, in a previous gang attack on June 29 against the same victim, accusing her of flirting with one of their boyfriends, said police.

Last week’s attack was revenge for reporting the earlier assault to police, the suspects admitted. The victim sustained at least three serious scars on her head and two in her mouth, and is now receiving medical treatment at a Busan hospital. Her mother told local media that the injuries were so severe she can’t even move her jaw to chew.

The suspects’ ages have become a core part of public interest because they all are minors and will likely face a more lenient punishment.

Under the Juvenile Act, which covers those aged 10 to 18, the maximum sentence is 15 years, while those from 10 to 13 are considered “protection cases” and do not face criminal trials. In the latter category, the worst penalty a person can get is two years in a juvenile reformatory.

A petition on the Blue House website seeking stiffer punishment against Korean teens has garnered nearly 240,000 signatures so far, prompting the justice minister to promise a review of the contentious law on Wednesday.

In an interview with the local news agency Yonhap, the victim’s mother, 36, said she would never forgive the suspects, adding that her daughter said she “absolutely hoped” they will be punished.

“None of them apologized at first,” the mother said, “but now that they’re afraid they could actually be punished, they’re starting to write apologetic statements on Facebook.”

The mother said she endorsed amending the Juvenile Act, because, “If not now, there could be second and third victims. My daughter could be a victim again, too.”

In Gangneung, Gangwon, police said Tuesday that six teenagers have been booked for allegedly beating a 17-year-old on July 17 for “spreading dark secrets” about them. The case gained media attention this week when the victim’s older sister uploaded photos of her swollen body, calling for severe punishment.

Police said the victim was still hospitalized from the injuries and receiving counseling.