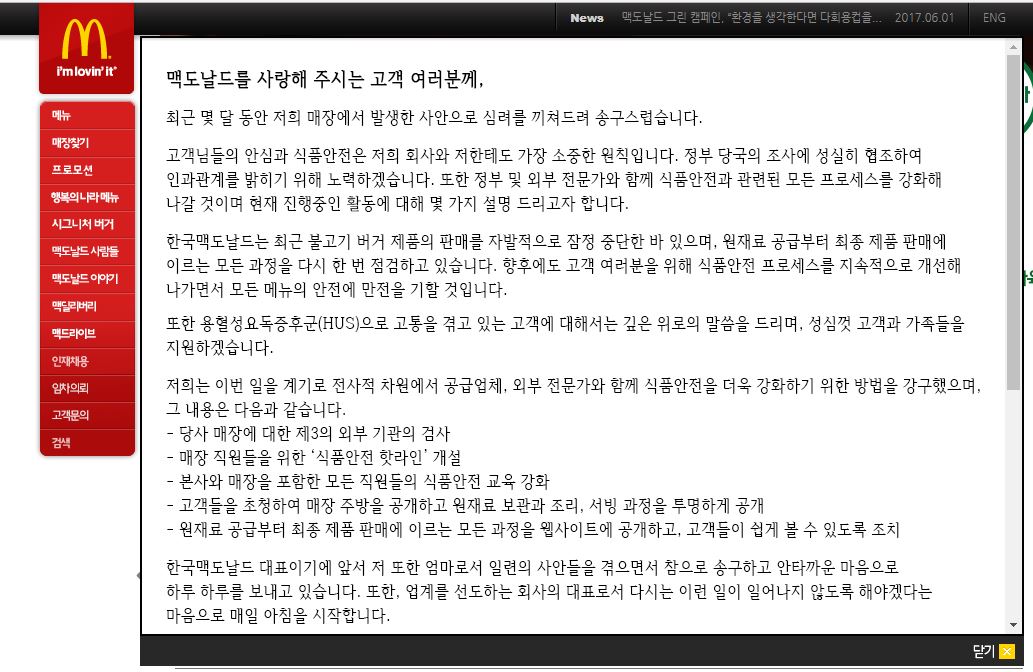 McDonald’s Korea expressed regret Thursday over a string of allegations that its products made customers ill, including a five-year old girl whose heart stopped for four minutes until she was revived by CPR.

The multinational food chain’s official notice of regret came five days after it temporarily stopped sales of bulgogi burgers nationwide after it was reported that eight people, seven of them young children, showed signs of food poisoning like vomiting and diarrhea after eating the Koreanized burger at a Jeonju branch in North Jeolla on Aug. 25.

“As you may be aware, a number of incidents involving McDonald’s restaurants have occurred in recent months,” said Melanie Joh, head of McDonald’s Korea, in an English statement sent to reporters. “I deeply regret that customers who visited our restaurants may have experienced any related illness,” she continued.

Aside from the Jeonju case, McDonald’s Korea has been dragged into a legal battle by the mother of a five-year-old daughter, who filed a lawsuit in July claiming irreparable harm was done to her child because of the fast food chain’s mismanagement of its food products.

Another case embroiling McDonald’s involves a two-year-old girl who began to have diarrhea and bloody stools after eating a hamburger patty on May 17 at a Jamsil branch in southern Seoul. On May 19, the child was admitted to a local emergency room.

The child’s condition improved and she was discharged later that day.

The food chain said it would “fully cooperate with the relevant authorities’ investigations to find the cause,” stopped short of acknowledging that the illnesses were caused by its products.

While the English version of the statement used the word “regret” over these illnesses, the Korean version, which was posted on the main web site of McDonald’s Korea, used the term “apologized,” prompting headlines that McDonald’s Korea finally “apologized.”

But McDonald’s Korea told the Korea JoongAng Daily the statement was not meant to apologize but was intended to express “regret” for incidents as investigations continue to find the causes of the illnesses.

The Korean branch chief also spoke in personal terms in the statement. “I am also a mom,” Joh wrote. “I live every day with concern over these recent matters. … I start every morning with the determination to prevent these matters from ever happening again.”

On Choi’s case, Joh expressed her “most sincere concern and care” and said her office would look for “possible ways we can support the child and her family.”

Jang Ko-woon, manager of McDonald’s Korea’s communication team, told the Korea JoongAng Daily that though an investigation into Choi’s case is ongoing, her company was willing to help Choi’s family financially to cover medical expenses “regardless of an investigation outcome.”

Choi’s case has been the most damning to date. Choi filed a lawsuit against the McDonald’s after the food chain refused to accept Choi’s insurance coverage request for medical bills for her daughter on June 2, citing a lack of proof that it was the Happy Meal the daughter ate on Sept. 25 that left the girl with HUS.

“While I have reservations looking back on what my family has gone through [over the past year], I do expect that McDonald’s Korea will match its words with action based on what it said today,” said Choi.