2 artists ferry their way to find the hidden Han

2 artists ferry their way to find the hidden Han 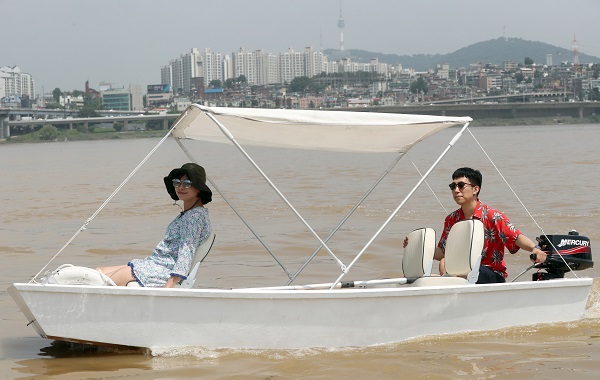 Jung Hye-jung, an artist, and her friend Ahn Sung-seok, a photographer, sail on Seoul’s Han River. They started a project titled “Lang lang: WAVEWAVE” in 2014 to promote the beauty of the river. [CHOI JEONG-DONG]

Images of the Han River from decades ago show people frolicking along its banks or swimming into its current, but such scenes are hard to find these days.

“One day I got curious,” says Jung Hye-jung. “We pass by the Han River every day and I wondered why I had no memories of having fun swimming in it. We could walk along the river but it’s impossible to get to the water.”

As a result, Jung and her friend Ahn Sung-seok, a photographer, started a project titled “Lang lang: WAVEWAVE” in 2014 to promote the beauty of the Han River.

The two met at a program supporting young artists, and Ahn proposed traveling to the middle of the river on a boat they built themselves.

He said it felt as though their curiosity would only fade after they had traveled to every corner of the Han. So they built their small wooden boat, christened it “Horakjil,” which means farming on your own, and set off on a mission to visit lesser known sections of the river.

Building the boat wasn’t a challenge since they already had the carpentry tools at their studio. The problem was what kind of boat that they wanted to make.

They had several ideas, including a roly-poly-like boat that wouldn’t flip even in strong winds and a boat with stairs leading to a room deep beneath the surface where they could the river as if in a submarine. Another idea was to install a rotating chair so that they could see the river in all directions without difficulty.

“The bottom of our boat isn’t triangular but flat, so that it won’t tip over easily from strong waves,” Ahn said. “During the Seoul International
Firework Festival, we took our boat out to Yeouido [in Seoul]. That day, there were a lot of big and small boats, as if everyone who owns a boat took them out and gathered on the Han River.”

He added, “But when big boats passed by, huge waves were created and it was dangerous for small boats like ours. In fact, that night on the news it was reported that many of the small boats were tipped over, but ours didn’t budge.”

The two now use their skills to record the changing appearance of the Han River. Jung draws the shapes of waves, while Ahn controls a drone that takes pictures of every corner of the river. In 2015, they held an event inviting people to sign up on the internet and take a tour along the river on their boat.

The tour lasted for four days from 9 a.m. and 5 p.m. each day, when Jung would take passengers traveling from Banpo to the Hangang Bridge, while Ahn would travel between Yeouido and Mapo Bridge. But their tour wasn’t what one might expect from a typical travel agency.

“For a long time, Mapo Bridge has been used by people committing suicide, so I wondered what would it be like to see the bridge from the surface to the top,” Ahn. “When I did the guide, I would talk like the person who reads dialogue in silent films, imagining myself as the person standing on the ledge.”

“In my case, I would have my friends stand along the river bank and when the boat approached, they would sing,” Jung said. “I also did a performance where passengers would release fish into the water.”

The two said they visit the river whenever they can. And from the records they have made, they recently published a book including their travels, along with sketches of some of their early boat designs, and some of the random things about the Han they’ve found along the way, like the location of the mountain that used to be where the National Assembly building now stands.