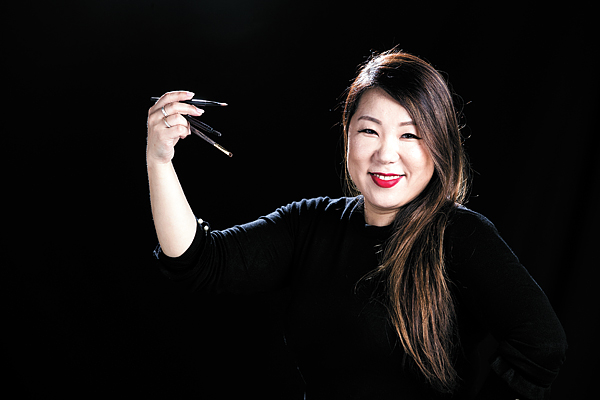 Taylor Chang Babaian during her interview in Seoul. [PARK JONG-GEUN]

Taylor Chang Babaian, the celebrated Korean-American makeup artist whose clients include Yoko Ono, Paula Abdul, Kayne West and Yunjin Kim, says life has thrown her many curveballs along the way, including being homeless for a period as a teenager.

Below is an excerpt of the interview with her on Aug. 24 in Seoul.

Q. What were some of your struggles growing up?

A. My family immigrated to the United States. My parents were always busy trying to make a living. Sometimes things wouldn’t work out and they would fight. In the end, they divorced.

So I left home when I was 14 and was homeless. I didn’t go to school, and I would sleep here and there where I could, like at a 24-hour donut place or laundry store, or even in the closet of my friend’s room when she took me in. I lived like that for a year and a half.

When did you decide to go back home?

I saw some kids around me get into drugs or die. And I saw that my life could also end up that way. I was able to get back in touch with my dad after a while and I went back home. I moved to Seattle with my dad, but we didn’t have proper furniture in the house, so I studied on cardboard boxes. But I studied hard and receive scholarships at my school. Unfortunately, I had to attend a community college near home due to my circumstances at the time.

When did you start working?

I always had two to three part-time jobs while I was studying at college. One of them was being a receptionist at a gym and this is where I met my husband. I married when I was 20 and we had two kids by the time I was 22. I just had three-week maternity leaves for each child and I didn’t have time to rest otherwise.

But I was good at what I did. So someone recruited me and I started working at a hair salon, managing files there. I think I worked some 14 hours a day back then.

How did you jump into the field of makeup artistry?

The hair salon that I worked at had a makeup class once in a while for customers. I attended it one day and the makeup artist thought I had a talent. So I started thinking about a career there. You see, ever since I was little, my mom always told me that I needed cosmetic surgery. She told me that I’m not pretty enough because I don’t have double eyelids.

So I was interested in makeup early on in life. I first copied the style of some of my Caucasian friends and my eyes looked bruised and swollen like I was hit by someone. But later I learned how to put it on so it best brought out my features. After I decided to become a makeup artist when I was 23, I thought about one thing: that I would be someone different among makeup artists. A book I was reading at the time said, “People don’t pay for the services that are the same as others.” So there.

Did you receive any help in becoming a makeup artist?

How could I have? I was on my own. First I emailed a bunch of reporters at magazines to ask what I should do. They told me that I should contact an agency called Cloutier Remix, which connects makeup artists with stars. I called the place but it didn’t answer.

So I visited the office and just kept trying to get my foot in the door. It got back to me in seven months, asking me if I would be okay working unpaid. I said yes right away. I had jobs after that, some paid, some unpaid. I worked at the hair salon during the day and worked at advertisement or photo-shooting companies at night. I would sleep only an hour at night, sometimes. But after three years of this, I was able to get an exclusive contract at Cloutier Remix, which is my agency now.

What held you together through these difficulties?

I thought of life as a game. Am I going to lose in it, or am I going to try to win in it? And if I am going to try to win in this game of a life, what should I be doing? These were the questions I’d often ask myself. I asked them also when I wrote my first book in 2005, “Style Eyes.” I had hurt my right hand at the time, I couldn’t write with it. But I couldn’t push off the deadline. So I wrote with my left hand, even though I have never used it to write before. So I tell my kids these days, nothing is impossible.

Did you ever want to erase your past?

Your past is what gives you strength to go forward. When I am exhausted sometimes, I think of the time when I couldn’t eat for five days straight, or when I had to sleep crouched on the stairs in some random building.

What brought you to Seoul?

I’m studying anthropology at UCLA, because I think it delves into what it means to be human. There is a reason for everything, including why women want to look beautiful. As I study further, I got more interested in this concept of K-beauty, and why many Korean women are so good at putting on makeup and why the Korean cosmetic products tend to be stellar. I wanted to find a different answer to these questions than the ones already out there, so that’s why I’m here.

What is your plan from here?

I intend to study business administration also. Just like how Sephora uses information technology to analyze consumer demands and trends, I want to develop an application that could be a model for technology in the cosmetics market. Like I said before, nothing is impossible.