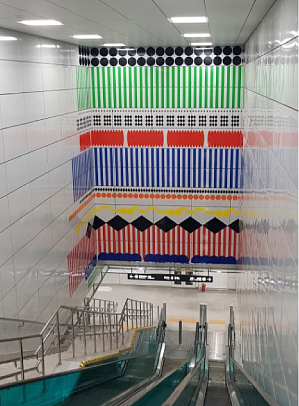 Seoul’s newest light rail line, dubbed the Ui-Sinseol line, connects neighborhoods in northeastern Seoul to the center of the city and has a markedly different atmosphere in its stations. Most noticeably missing are the floor-to-ceiling before-and-after photos advertising plastic surgery clinics commonly seen in subway stations throughout the capital. The new line is called a “cultural railway project,” and it bans any commercial advertisements on the train or in the stations except for ones promoting cultural events like music or dance festivals.

The train, which began running earlier this month, runs without a driver on board through 13 stations from Sinseol-dong in Dongdaemun District, eastern Seoul, to Ui-dong in Gangbuk District, northern Seoul. Six stations are designated “art stations” and display different creative works. The walls of the station are covered in artwork as well as information for those who want to learn more about cultural events across the city. Subway stations become platforms where cultural trends are shared instead of just places that people walk through on their way to somewhere else. 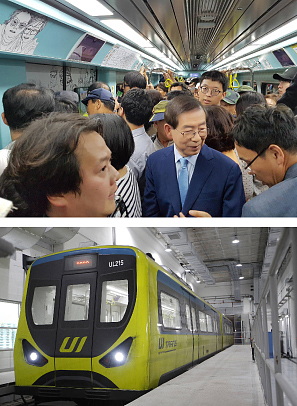 Top: Seoul Mayor Park Won-soon rides one of the decorated train cars, the exterior of which is shown above. [YONHAP]

At Sinseol station, works by six different artists on display include “Evergreen Tower” by Yeondoo Jung, “Angel Soldier” by Yongbaek Lee and “The Ark of Obsession” by Won Seoung-won. A short hallway in the station that connects the Ui-Sinseol line to line No. 1 to present small-size reproductions of paintings by the artist Chun Kyung-ja. There are 13 pieces on the wall that depicts landscapes the artist saw during her travels overseas to the United States, Mexico, India and Japan.

At Sungshin Women’s University station, artist na kim, also known by her Korean name Kim Young-na, decorated a wall by the escalators with colorful patterns. She was named Today’s Young Artist by the Ministry of Culture, Sports and Tourism in 2014. Some other stops along the line featuring art are Bomun, Solsaem, Jeongneung, Bukhansan Ui stations.

“The subway line goes beyond just being a transportation method and provides a cultural experience for residents in the northeastern part of [Seoul], where we have a lack of cultural facilities,” said Seoul Mayor Park Won-soon. 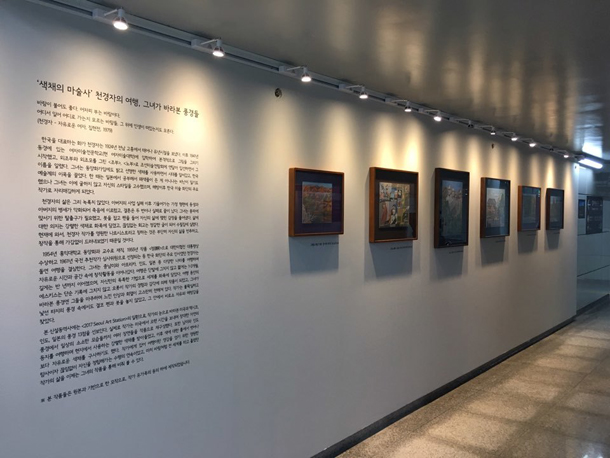 At Sinseol station, 13 artworks by Chun Kyung-ja are displayed alongside the aisle that connects the Ui-Sinseol line to subway line No. 1. [YONHAP]

Even some of the train cars are embellished with work from local artists, creating “cultural mobility,” a concept applied to some of the subway stations London, Stockholm and Munich, according to the Seoul Metropolitan Government. Currently the decorated cars have drawings of different faces that symbolize people getting on and off the trains cars everyday under the theme “Every citizen is an artist.” The idea is to remind riders of people that they miss.

The fee for riding the Ui-Sinseol line is the same as riding most other subway lines in Seoul - 1,250 won ($1.10) for adults, 720 won for teenagers and 450 won for children. The same transfer system applies as well.