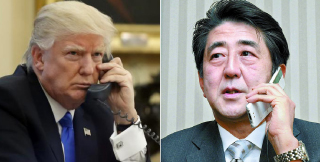 After midnight on Sept. 4, Japanese Prime Minister Shinzo Abe stood in front of reporters. He had just finished his second phone call of the day with U.S. President Donald Trump. Compared to his exhausted appearance earlier in the day, Abe glowed. As if he had an endorphin rush, he didn’t seem tired. He must have been proud that two calls a day proved that he was closest to Trump.

Abe’s telephone diplomacy with heads of states over North Korea’s missile launch and nuclear test is controversial. Many consider it a performance to boost his ratings. Some sarcastically say, “He made so many phone calls. How much more will he do?” But the contents of the conversations are also noteworthy.

In diplomatic circles, there is convincing speculation that Abe discouraged Trump from using military options. If the United States makes a pre-emptive strike, North Korea will certainly strike back — not just South Korea, where U.S. military bases are located, but also Japan which can hardly be excluded as a target. Since he is not sure if Japan can defend itself perfectly in case of a North Korean attack, he tried to put a hold on the option of a pre-emptive strike.

The most worrisome scenario is the United States carrying out a military option without notifying Japan. Unlike South Korea, which shares wartime operational control with the U.S., Japan is anxious that it could be attacked by North Korea without notice from the United States. Abe would be asking to hold the attack until Japan acquires a high altitude interception system.

After a North Korean missile flew over Japan, its fear over a missile is real. A retired general of Japan’s Maritime Self-Defense Force even appeared on television and discussed whether Japan would be safe from radiation if North Korea’s nuclear missile was intercepted midair.
A Japanese reporter covering the foreign ministry in Tokyo said that what he is most curious about was the true intention of the Moon Jae-in administration.

Seoul denounces North Korea and supports tightened sanctions, but he still suspected that Seoul would try to talk to Pyongyang someday. As South Korea’s ruling party leader suggested sending special envoys to Pyongyang and Washington a day after the North’s latest nuclear test of a hydrogen bomb last week, his suspicion may not be completely unsubstantial.

Japan hopes that the new Korean ambassador to Japan will be a messenger between the two governments. But there are rumors that he could be more conscious of North Korea given his academic background prioritizing dialogue with Pyongyang. While I hope it to be groundless fears, we may see Abe focusing on telephone diplomacy more frequently.