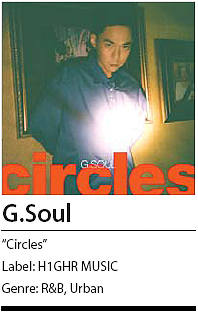 The sultry voice of singer-songwriter G.Soul is back with a six-track EP titled “Circles.”

Having recently made the rounds as a featured artist on tracks from Zico and Dumbfoundead, he has been stirring up his fans who have eagerly awaited his first release with his new agency H1GHR MUSIC, where he signed in June after leaving JYP Entertainment, where he debuted.

G.Soul participated in writing and composing all of the tracks on “Circles.”

He usually sings love songs, detailing the complicated feelings of having fallen for someone head over heels.

The lead single “Can’t” is an easy-going R&B groove. The chorus’ dreamlike rhythms create an inviting tone that draws the listener deeper into the song.

The six tracks are divided by “One More Interlude,” which smoothly switches the tone of the songs from playful, celebratory mood - on tracks like “Tequila” and “bad habit” - to a more sober and complicated set of songs, like “Circles,” “Found You” and “Can’t.”