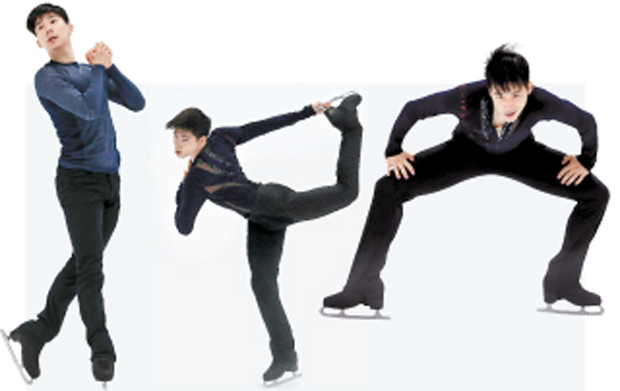 Over the years, Korea has managed to increase its competitiveness in many Winter Olympic Sports like snowboarding, curling and bobsleighing. Not only that, by having more naturalized athletes on the men and women’s national ice hockey team, Korea is slowly preparing to compete against the world’s best teams at the upcoming PyeongChang Winter Olympics. 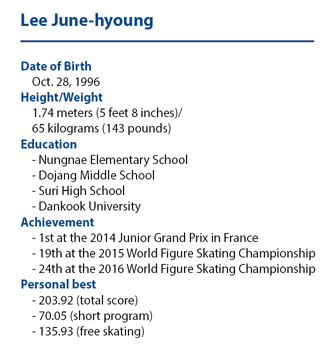 But men’s figure skating is one sport where Korea has been unable to earn an Olympic berth, despite the event being held in Korea. Since the 2002 Winter Olympics in Salt Lake City, the Korean male figure skaters have never been seen at the Olympics.

To make it possible, Lee June-hyoung is set to compete at the 2017 Nebelhorn Trophy in Germany starting on Sept. 27 to earn an Olympic berth for Korea’s men’s figure skating team, as the competition gives up to six Olympic tickets depending on the results. If Lee finishes in the top six, Korea will be able to send one male skater to PyeongChang in February. Even if Lee earns an Olympic berth, it is not guaranteed that he’ll compete, as he has to go through qualifications alongside other Korean figure skaters.

“The Olympics in PyeongChang is an opportunity that won’t happen again,” Lee said. “As it is hosted in Korea, I want to compete in the Olympics next year more than anything. I want to show the world that there are also male figure skaters in Korea.”

To make his dream of reaching the Olympics possible, the biggest concern he has until next February is the injury that still bothers him from a car accident in 2015.

“The trunk in our car was crushed but I didn’t go to the hospital because I didn’t feel any pain at first,” Lee said. “Then two days later, my back started to hurt and when I got on the ice, I had such severe pain that I couldn’t even stand still. I wanted to give it all up.”

Prior to Lee’s injury, during the 2014-15 season, Lee became the first Korean male figure skater to win a gold medal at the 2014 Junior Grand Prix in France. After this he received significant attention from the media and the Korean figure skating community as the next Kim Yuna. But that only lasted a little while, as the injury limited his choreography.

Still, Lee trains at the Korea National Training Center and works on his technique. In figure skating, where jumps and rotations take up the majority of the choreography, back strength is vital for stability. His back needs to be strong to maintain his balance and enable him to jump higher.

“My back hurt so much that I couldn’t even wear skates,” Lee said. “But I couldn’t give up with the PyeongChang Olympics coming up.”

“When I got injured from a car accident, I was really angry because the injury wasn’t my fault,” Lee said.

To make the matter worse, Lee had to get eight stitches on his right shin after getting a cut from the blade of his skate during training. While Lee’s figure skating career was going downhill, Cha Jun-hwan came out of nowhere, winning a bronze medal at the 2016 Junior Grand Prix Final for the first time in the history of Korean men’s figure skating.

Since only about 50 out of a total of 700 figure skaters in Korea are male, Cha’s achievement was just as shocking as when Kim Yuna rocketed to the top of the women’s figure skating world when Asada Mao was dominating in the mid 2000s.

Cha, who is five years younger than Lee, quickly became the favorite to compete at the Olympics.

“Up until a few years ago, I thought Jun-hwan was a lot younger than me,” Lee said. “But Jun-hwan last season was nothing like what I’ve known. It takes me a long time to master a new technique. I’ve started practicing the quadruple jump since 2015, but I’m only at about 70 to 80 percent complete, but Jun-hwan got it done in a year.”

And Cha’s success was a great motivator for Lee to get back up. Lee slowly got his condition up by getting his back treated before and after the competition and, since March 2017, he started preparation for the upcoming 2017-18 season. Rather than the quadruple jump, which puts too much pressure on Lee’s back, he came up with choreography that shows more expression than technique.

During the Figure Skating Korea Challenge in July, the first PyeongChang Olympic qualification competition, Lee won with a total score of 228.72, more than 20 points ahead of Cha.

“I’ve gotten better by having a competitor like Jun-hwan,” Lee said. “I want to earn an Olympic spot and show the beauty of male figure skating at the Olympics.”