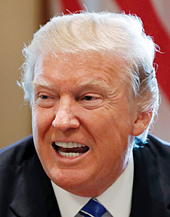 Seoul and Washington are discussing a possible trip to Korea by U.S. President Donald Trump in November, the Blue House said Wednesday.

“We’ve discussed his visit to Korea,” said a Blue House official after Japanese media reported that Trump will visit South Korea, China and Japan as a part of a trip to Asia. The Asia-Pacific Economic Cooperation Summit will take place on Nov. 10 and 11, in Vietnam, and summits of the Association of Southeast Asian Nations (Asean), Asean Plus Three and the East Asia Summit will take place in the Philippines from Nov. 13 to 14.

Japan’s Asahi Shimbun reported that Trump will visit Japan from Nov. 4 to 6 and visit other Asian countries aside from Vietnam and the Philippines, presumably South Korea and China.

The Blue House also said a plan is also being discussed to hold a trilateral summit among Moon, Trump and Japanese Prime Minister Shinzo Abe on the sidelines of the United Nations General Assembly in New York next week. The annual UN meeting is scheduled for next Tuesday.

Japanese media also reported about a trilateral summit plan. They said the meeting is scheduled to take place on Sept. 21.

It would be the second trilateral summit for Moon, Trump and Abe. Their first meeting was in July on the sidelines of a Group of 20 Summit in Germany.

During his trip to New York next week, Moon will give a speech at the UN General Assembly. He will also attend the regional summits in November in Vietnam and the Philippines. It remains to be seen if Moon will sit down with Chinese President Xi Jinping on the sidelines of the New York event. While Moon communicated with leaders from around the world, including Russian President Vladimir Putin, after the North’s sixth nuclear test on Sept. 3, he has yet to speak with Xi.

The summits are being discussed as the international community tries to pressure North Korea to give up its nuclear and missile programs. Since the North’s sixth nuclear test earlier this month, calls are growing in South Korea, particularly among conservative politicians, for a return to Korea of American tactical nuclear weapons.

The main opposition Liberty Korea Party sent a delegation to Washington on Wednesday to persuade U.S. politicians and scholars of the need for such a return.

Rep. Lee Cheol-woo, chairman of the National Defense Committee, led the six-member delegation. For the next four days, they will meet with Congressional leaders and members of the Heritage Foundation.

“The sense of insecurity is high after the North mastered nuclear weapons technology, and the public strongly demands a nuclear-armed South Korea,” Lee said. “About 70 percent of the people demand the redeployment of tactical nuclear weapons in particular.”

A poll conducted last week by the Korea Society Opinion Institute showed that 68.2 percent of the respondents want the redeployment of tactical nukes, while 25.4 percent said they oppose the idea.

He said redeployment of U.S. nukes wouldn’t be militarily effective. “Nuclear weapons are frightening because of their destructive power. But their powers will double when they are launched at any time with no means to stop them. If tactical nuclear weapons return to the South, their locations will be limited because the United States has operational rights in addition to wartime operational control. That will be an act of offering pre-emptive strike targets to the North.”

Another senior Blue House official condemned the opposition party for its campaign for a nuclear-armed South. “We are under the U.S. nuclear umbrella,” he said.

“The opposition party has long promoted the alliance with the United States, but they are now visiting Washington to demand the redeployment of the tactical nukes. They are publicly saying that they do not trust the ally’s commitment.”

The United States deployed tactical nuclear weapons on the Korean Peninsula for the first time in January 1958. The number of tactical nukes in the South increased over the years and peaked at 950 in 1967.

In September 1991, U.S. President George Bush declared the complete withdrawal of tactical nukes from the South.