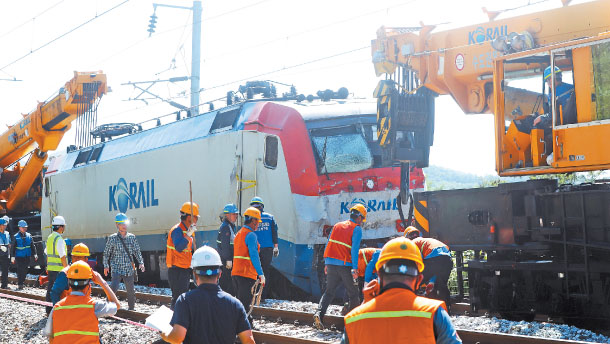 Workers tow two trains that crashed into each other, on a test run on a railway line to be used for the PyeongChang Winter Olympics, in Gyeonggi on Wednesday. [YONHAP]

Two trains on a test run on a railway line to be used for the PyeongChang Winter Olympics crashed into each other in Gyeonggi on Wednesday, killing one engineer and injuring six people.

“We were testing the railway electricity and signal systems and railcars on the line that is to be used by foreign visitors traveling from Incheon International Airport to Gangneung, Gangwon, for the PyeongChang Winter Olympics,” said a spokesman of the Korea Rail Network Authority.

“We don’t know yet why the accident took place. The Ministry of Land, Infrastructure and Transport and the Aviation and Railway Accident Investigation Board are investigating.”

A train crashed into another standing still on the railroad between Yangpyeong Station and Wondeok Station on the Gyeongui-Jungang Line around 4:50 a.m. Monday.

The engineer of the train that slammed into the stationary train, a 45-year-old surnamed Park, died. All six injured were railway employees, as there were no ordinary passengers on the trains during the test run.

They were hospitalized on Monday - among them, three are said to have sustained serious injuries.

“We are testing the older line to make sure all is ready for the transportation during the Olympics.

“We were to test the line until Oct. 13 but we may stop the tests until we find out what went wrong in this one to have caused the accident.”

The section of the railroad between Yangpyeong Station and Wondeok Station was closed for a few hours until 7:35 a.m. Monday.