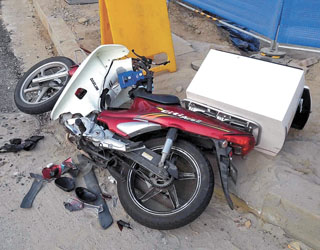 The wreckage of a bike belonging to a 24-year-old delivery man surnamed Choi, who was killed by an unlicensed teenage driver. [ONLINE COMMUNITY]

A 24-year-old delivery man surnamed Choi would have marked his first marriage anniversary in a month, had he not been killed by a high school girl. Instead, he has left behind his 6-month-old son and 58-year-old father.

Last Sunday at 2:25 a.m., Choi was in a fatal accident near Gangneung Stadium, Gangwon, when an 18-year-old surnamed Kim reportedly snuck out with her mother’s car and three friends. Police say Kim, driving unlicensed, ran over Choi while heading to the aforementioned stadium. They have detained Kim for violating the Act on Special Cases concerning the traffic accidents and are looking into the details.

“He said he would do his best to raise his newborn child, and that must have been the reason why he was out so late working at night,” Choi’s father told the JoongAng Ilbo. “Everywhere his body was covered with injuries. He never complained or showed signs of fatigue to stop me worrying. He was a good child.” Choi’s father had surgery for rectal cancer five year ago and is continuing to fight it.

After marrying, Choi lived in a rented apartment. He supported his family with food deliveries since Sept. 2, working between 2 p.m. and 2 a.m., earning a monthly wage of 4,000,000 won ($3,544). “His working hours should have ended according to his schedule, but he must have gone out on a last-minute chicken delivery to earn that extra commission,” said an employee at the delivery company.

Teenage driving accidents regularly cause deaths and injuries. On Sept. 7, a 17-year-old crashed into the median in North Chungcheung and died, and on Aug. 31 in Nam District, Busan, another 17-year-old driving with his friends rammed into five cars parked in a row. Police files state that teenage unlicensed driving caused 662 accidents, or about 15 percent of all unlicensed driving accidents last year - killing 11 people.

Accidents involving rented cars by teenagers using fake identities are also on the rise. In July, three unlicensed teens drove a rented car near a tunnel in Yanggu County, Gangwon, and one died in an accident. A similar case happened in April when four teens without driver’s licenses rented a car and rammed into a taxi, causing property damage to a nearby gas station.

The Korean Transport Safety Authority says that between 2010 and 2015, drivers under 20 caused 458 cases out of 1,474 total unlicensed driving accidents, or about 31 percent. Out of 39 lives lost from such incidents, 19 were caused by unlicensed teenage drivers.

“Unlicensed teenage driving accidents are caused by curiosity or rebellion,” said Lee Yoon-ho, professor in the police administration department at Dongguk University. “Formal curricula should include education on driving safety and manners.”