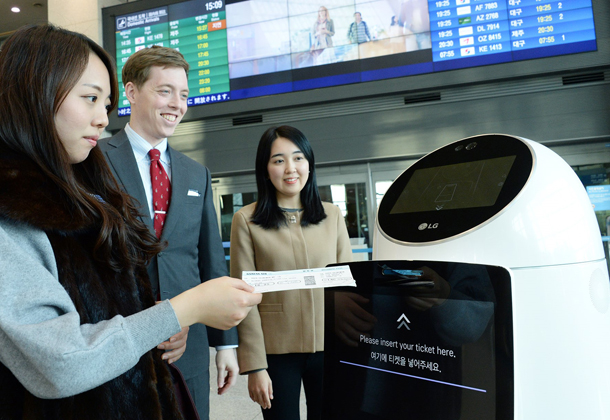 LG Electronics and affiliate LG CNS have won an order from Incheon International Airport for artificially-intelligent robots speaking multiple languages and a system to control the robots to be installed next June.

The robots will be designed and built by LG Electronics based on software developed by its IT solutions arm LG CNS.

Some AI-powered robots will go into pilot operation during the PyeongChang Winter Olympics period in February. In June, 14 will be dispatched to the airport.

LG said the deal with the airport is the biggest order for AI robots in Korea but did not disclose the value of the order. The country’s second-biggest consumer electronics producer after Samsung already supplied five cleaning robots and five guide robots in a pilot program this year. The guide robots also give information to travelers about the airport and can even escort them to a boarding gate.

The robot monitoring system, introduced in Korea for the first time, has been built by LG CNS. The system will be able to locate robots and move them according to the need.

“Incheon International Airport, by introducing AI robots, has improved its image at the advent of the fourth industrial revolution,” said LG CNS in a statement. “We will pioneer the AI service robots business by linking the Internet of Things and AI.”

The company signaled it would try to market the system to major international airports in Europe and the Middle East as well as public companies in the near future.

LG CNS started robot software development in 2013. It supplies the Android Studio plug-in for SoftBank’s humanoid Pepper robot and tablet computers attached to the front of the robot.