Bringing the audience to the scene of a crime: Kim Gina’s award-winning VR film ‘Bloodless’ depicts the devastating true story of a victim of sexual assault

Bringing the audience to the scene of a crime: Kim Gina’s award-winning VR film ‘Bloodless’ depicts the devastating true story of a victim of sexual assault 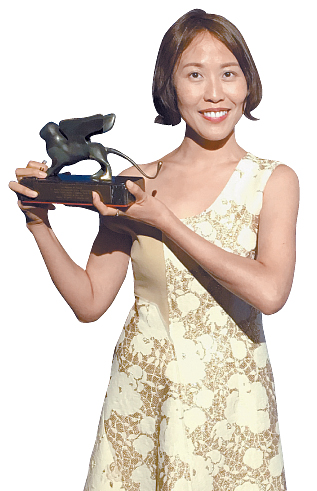 Director Kim Gina’s “Bloodless” was given the Best VR Story Award at the 74th Venice International Film Festival, which wrapped on Sept. 9.

In October of 1992, an American soldier brutally killed a 26-year-old Korean sex worker at a decrepit house in Dongducheon, Gyeonggi. There were clear signs of violence and rape - two beer bottles and one cola bottle were found inside the victim’s body.

This incident infuriated Koreans, bringing all sorts of people from university students to feminists and politicians out to the streets, staging anti-American demonstrations. One of the people on the streets was Kim Gina, who was a freshman studying Western painting at the time.

Unable to forget the incident, Kim, who later became a film director, recently produced a virtual reality (VR) documentary based on what happened 25 years ago. Titled “Bloodless,” the 12-minute film was given the Best VR Story Award at the 74th Venice International Film Festival, which wrapped on Sept. 9. Venice was the first of the world’s three most prestigious film festivals, including Cannes and Berlin, to create a competition prize for VR films this year.

Though Kim had long planned to make a movie about the incident, she knew that the film would be possible only after experimenting with VR last year. Most importantly for the director, the technology would allow the story to be told without re-creating the violence suffered by the woman.

“Film is a medium based on voyeuristic pleasure because the world shown on screen is very fake, and audiences feel very distant from that world. So I thought it would be difficult to respect the victim [if the incident was made into a feature film],” said Kim during an interactive event held Wednesday at National Museum of Modern and Contemporary Art of Korea (MMCA) in central Seoul.

“But after accessing VR for the first time last year, I realized it would be possible to tell the story differently by having the audience experience the incident instead of watching it from a third-person point of view.”

Kim’s film features the last few minutes of the victim’s life before her death. It neither depicts violent scenes nor the American soldier, but a few scenes featured the supposed victim wandering the dismal streets before being discovered bleeding to death in a shabby room.

When asked the reason for the indirect approach, Kim said she did not want to limit the issue to the specific incident. Instead, she wanted to raise the awareness of the closely intertwined relations between the military and the commercialization of sex, which “seems inseparable but actually is separable,” according to the filmmaker.

Depending on where they are from, the audience has reacted differently toward the documentary.

“While the audience at Venice hardly felt fear, Korean viewers tended to feel scared upon entering the area [in the VR documentary],” said the filmmaker.

To discuss the award-winning “Bloodless,” Kim sat down for an interview with the Korea JoongAng Daily. The following are the edited excerpts. 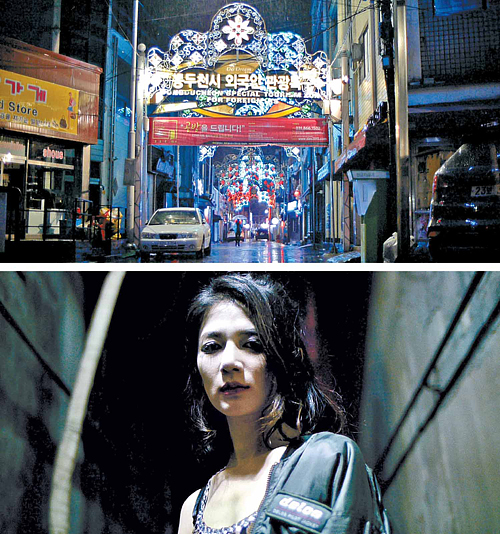 Scenes from “Bloodless,” which is based on an incident that occurred in 1992. The VR film revolves around a Korean sex worker who was assaulted and killed by an American soldier at Dongducheon military base camp. Even after 25 years, the area remains remarkably similar. [CRAYON FILM]

Q. You won the Best VR Story Award at the Venice Film Festival. How do you feel?

A. I feel grateful and encouraged. I made the film with the hope of having people sympathize with the pain of others. Though I wondered whether [the film] would be able to pull that off, I’m grateful that it was received well and left a strong impression.

How did you feel about the 1992 incident when it broke out?

I, as well as anybody who knew of the incident, was heartbroken. At the same time, I felt indebted to the victim after a photo [of the victim’s body] leaked nationwide. I thought about the photo leak and how it violated the woman’s human rights, and it got me to think more deeply about the lives of sex workers in military camp towns. They didn’t belong anywhere. Once they got in, Korean society did not accept them back. They were considered the lowest in hierarchy within the prostitution industry. But what many people don’t know is that those women contributed a lot in Korea’s economic development by earning a great amount of foreign currency in the 1970s and ’80s.

Why did you include so many scenes showing the streets of Dongducheon?

I was surprised to see how preserved the streets are. They also have historical meaning, and I felt a sense of responsibility to record the streets before they’re gone, which I believe will be soon. I didn’t recreate the victim suffering, but instead I showed the final three-minute journey the woman would have had from the club [where she met the American soldier] to the room [where she was found dead]. Though it was the woman’s journey that night, it was also the journey of her life, where she lived and worked.

The scene where the victim stares at the viewer leaves quite an impact. What look did you tell the actress to show?

I directed the actress to show a pitiful, sorrowful look, pleading with the viewers to see her and be with her. Though it is hard to see because of the low image quality, a tear falls as she turns back.

What did you expect audience to feel watching this VR documentary?

I made the film hoping to raise awareness of sexual assault on women. Not only in Korea, but in many countries, military camps and prostitution are perceived to be inseparable, though they actually are. What I ultimately wanted was to create a sense of sympathy for social minors who are not in the mainstream.

VR is a different medium from film, but VR surely has an explosive potential. With almost everyone having a smartphone these days, it can be used commercially. I believe the definition of media will change with the simplification of VR production and the prevalence of its tools. I believe people will be able to deliver their stories much more powerfully through VR.

Do you have any plans for your next film?

I will make a film with a similar context. It will be about women and sexual assault. It will be around 10 minutes long, and I’m planning to make it into a series.