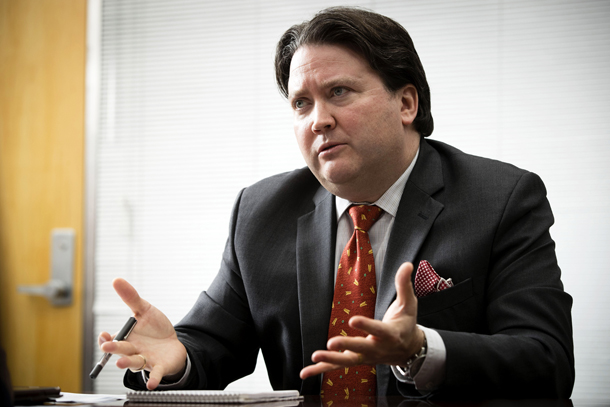 Marc Knapper, acting ambassador of the U.S. Embassy to Korea, sits for an interview with the JoongAng Ilbo last week. [JANG JIN-YOUNG]

Marc Knapper, acting ambassador of the U.S. Embassy to Seoul, said that while Washington is ready to defend its allies, it’s “not looking for conflict” with North Korea.

Knapper, the U.S. Embassy’s charge d’affaires, sat for an interview with the JoongAng Ilbo last week in the aftermath of North Korea’s sixth nuclear test on Sept. 3 and addressed various topics such as the military option in the standoff with North Korea and his assessment of the current state of the alliance with Seoul.

He described Korean President Moon Jae-in as a “good steward” of the South Korea-U.S. alliance and added that the two countries were “on the same page” in regard to North Korea.

Knapper stressed that Moon visited Washington within 60 days of his inauguration and met with U.S. congressional delegations and military leaders. He said U.S. Secretary of State Rex Tillerson’s visit to Korea in March was an indication of the efforts put into the alliance.

“I think [President Moon has] gone out of his way to try and find opportunities to meet with our leadership,” he said. “If you don’t care about the alliance you don’t do that.”

Knapper has been serving as acting ambassador since Mark Lippert stepped down in January.

He earned his bachelor’s degree at Princeton University and served at the U.S. Embassy in Seoul from 1993 to 1995 and 1997 to 2001 before returning in 2015. Knapper has visited North Korea twice. He is fluent in Korean, Japanese and Vietnamese.

Q. North Korea conducted its sixth nuclear test. Is it getting close to crossing the United States’ red line?

A. I’m reluctant to talk about red lines. We have made very clear that these activities, both the missile and the nuclear programs, are illegal activities that violate the will of the international community. And so, we are resolved - your government, our government and others - to work together, in the United Nations and around the world, to do what we can to secure the complete, verifiable and irreversible denuclearization of North Korea. We very much appreciate the really great coordination between the Korean government and the U.S. government on this, as well as working with the Japanese and others. We’re also counting on the Chinese and Russians to do the right things as well.

Is there really the possibility of the U.S. exercising a military option?

The U.S. Forces Korea have an expression, “Ready to fight tonight.” This means that as an alliance, we are always ready to deter North Korean aggression, and if necessary, defend against it. When [Gen. Joseph Dunford, chairman of the Joint Chiefs of Staff] was here a couple of weeks ago, he made the point, “Look, we’re prepared for war, but we are not preparing for war.” And it’s a subtle grammatical difference: It means that we’re ready if we have to be. If the North Koreans bring the fight to us, we’re ready to defend our allies, we’re ready to defend the American people. But we are not looking for conflict. Our focus right now is on diplomatic efforts, economic pressure, coordinating with the international community, and working closely with China and Russia.

By economic pressure, could the U.S. implement full-fledged secondary sanctions?

Yes, you know, we’ve identified a number of companies, not just in China, but also in other countries, Russia and Libya. I think our view is clear on this, that if we find that there are companies out there that are involved in business that is violating UN Security Council sanctions, then we’ll take steps to address those concerns.

President Moon Jae-in is showing an attitude change toward North Korea. Some people think this may be because he is concerned the United States might strike the North if it continues its provocations.

I can’t say that I can be President Moon’s psychiatrist right now. But I think we’ve been very happy with President Moon’s leadership and his commitment to this alliance .?.?. He’s proven to be a very good steward of our alliance. Some of the steps he’s taken have really shown that he cares about this alliance and he wants to ensure that it’s as strong as it can be, and we have the strongest deterrence possible.

There have been a fewer number of phone calls between U.S. President Donald Trump and President Moon compared to Trump and Japanese Prime Minister Shinzo Abe. Should we be concerned?

I’d rather not focus on the number of calls. I think it’s important to look at the quality and the content of the calls. It’s important to show that when our leaders speak, they’re talking about very serious issues, they’re consulting very closely, they’re reaching agreements on things.

Is there a need for the redeployment of U.S. tactical nuclear weapons to Korea?

We are on the record as saying we don’t agree with the need. We believe that our extended deterrence capability is more than sufficient to provide the kind of deterrence that Korea needs against the North.

More Koreans are thinking we may need to go nuclear.

That may be the case during peace time.

At a time when we’re trying to deter the North… it’s really incumbent upon the leaders of both countries to make the point about strong deterrence and to ensure that we’re not complicating the issue by introducing nuclear weapons. The Korean people should have faith in the U.S. commitment, and to know that we take very seriously and very solemnly our commitment to this alliance, and our obligation, our responsibility to defend the South.

In a meeting with Korean legislators you made a remark, “Korea is not the leading role but a leading role.”

I think my comments were slightly misunderstood. My point was that .?.?. as allies we have a shared interest in and a shared responsibility to address the North Korean nuclear and missile threats together. Korea’s not doing it alone and we’re not doing this alone. We do it together. So to me, the term “the” leading role implies that Korea’s on its own. My point was no, Korea’s not on its own, Korea’s in this with the United States. We’re with you.

Do you think the Korean government shares that idea?

[North Korea] is our number one security issue and we have to work together and consult closely together. We talk about consulting closely, coordination and cooperation, but that’s a two-way street. I know that we pledged to consult, but we also hope that Korean government will consult with us. In that sense, we have a shared responsibility to address the problems here. We’ve made clear that we’re on the same page. I think we’ve tried to show through our actions and our statements that there’s no daylight between us.

What should we understand about President Trump’s tweet accusing Seoul of “appeasement” toward Pyongyang?

I think his subsequent telephone conversations and context has shown that we’re on the same page, we agree on the need for maximum pressure, denuclearization and working together and working with allies like Japan and trying to get China and Russia to do more.

To me, the real question is: Why hasn’t the North responded yet to President Moon’s very humane suggestion for family reunions [of people separated during the 1950-53 Korean War]? This is not something that should be a political issue .?.?. For me, the real issue is finding a humane way for all these families to reunite.

At this moment, South Koreans worry about a war on the peninsula.

Well, I understand that’s what is on people’s mind. All I can say is what our leaders have said. Our focus right now is not on military options, our focus is on diplomatic options, economic options. As [Defense Secretary Jim] Mattis and others have said, there is very, very clear recognition of how catastrophic a conflict would be here. War is not something we are looking for. But we are prepared to respond to any aggressions from the North.

What are the chances that the United States will make some sort of “deal” with the North Korea and perhaps withdraw troops?

Our alliance right now is the strongest it has ever been. There is no talk of us withdrawing, there is no talk of us cutting a deal to withdraw our troops or down-scale our exercises. We’ve said very clearly and publicly that the idea of a freeze-for-freeze is unacceptable and .?.?. we are not entertaining it at all. It’s not a fair trade. There is no discussion of us withdrawing our troops from here, there’s no discussion of downgrading our alliance.