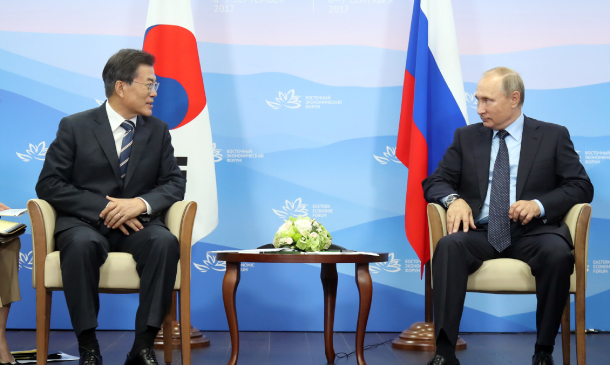 South Korean President Moon Jae-in, left, and Russian President Vladimir Putin meet at a bilateral summit on Sept. 6 in Vladivostok on the sidelines of a regional economic forum. [YONHAP]

The vast Siberian territory at the northernmost tip of Russia is not as distant as we may think. By plane from Seoul, it takes two hours and a half. We picture the area as a wintry and harsh environment near the Arctic.

But it actually is an endless stretch of fields and dense forests. Korean shipbuilding giant Hyundai Heavy Industries runs an atypical business of farming soybeans, corn, and other crops in two farmlands across Ussuriysk in Primorsky Krai with advanced automated systems. The first farm began cultivation in 2009. Operators I met there last year said they have been in business for a decade but still did not know Russia well.

To realize the ambitious plans for the Russian Far East he described at the Eastern Economic Forum recently in Vladivostok, South Korean President Moon Jae-in must be as patient as the farmers of Hyundai Heavy Industries. He envisions using economic ventures with Russia as leverage to stop North Korea’s nuclear program and coax Pyongyang into dialogue. But Moscow may not be as eager as he is.

During summit talks on the sidelines of the Eastern Economic Forum, Moon asked his Russian counterpart Vladimir Putin to play a stronger role in reining in Pyongyang’s weapons program.

Putin coolly responded that he did not wish to push North Korea into a corner. Instead, the Russian leader advised Seoul to go further to appease Pyongyang by removing U.S. troops from the Korean peninsula.

Moon must have been disappointed at the lukewarm response to the offers in his so-called “New Northern Policy,” bundled with extensive ventures in gas pipelines, railways, electricity, Arctic sea routes, shipbuilding, industrial complexes, farming, fisheries and cooperation with North Korea. Putin’s response was as icy as the Siberian winter. Russia invites foreign capital and cooperation, but is in no rush to seal any deals.

Far East development has been Putin’s longtime ambition and signature slogan. Primorsky Krai is Russia’s largest coastal region and is 9,288 kilometers away from Moscow by the Transcontinental Siberian Railway. It became part of Soviet territory under the 1860 Beijing Treaty. It has emerged as a new sea route for East Asia and a competitive hotbed for economic ventures among South Korea, China and Japan.

Despite its mammoth size, the human population there totals just 6 million people. It has become more subject to China because of its close proximity to three burgeoning border regions of China with over 100 million people.

Putin has accelerated development in the region in order to ensure Moscow’s grip over the resources-rich territory. After the capital Vladivostok was designated the host city for the Asia Pacific Economic Cooperation Summit Conference in 2012, Moscow spent over $10 billion to build transportation and urban infrastructure. Putin envisions making the area an economic hub for East Asia.

Cash-short Russia needs foreign capital for its development ambitions. Japanese Prime Minister Shinzo Abe was eager to comply. He had met with Putin 16 times last year, but did not make much headway on the economic front. Moscow is being courted by Seoul, Beijing, and Tokyo at the same time and needs not be in a hurry. It is opposed to North Korea’s nuclear development but does not mind the status quo unless Pyongyang passes a so-called red line.

Moon’s northern campaign, therefore, must take into consideration these factors. The government is said to be pursuing a $2 billion fund for various projects in the region including the Rajin-Khasan industrial complex.

But we need not look so keen. The two countries set up a joint economic, science, and technology committee in 1997, which has made little progress. Each new government made ambitious promises, but lost interest when progress was slow.

What is needed is persistence. Seoul must earn trust from Russians as the Hyundai Heavy farmers have through a decade of patient and consistent investment. Moon must not expect to reap immediate fruits from his northern campaign. Korea’s policy must keep pace with Moscow’s and have eyes on long-term results.