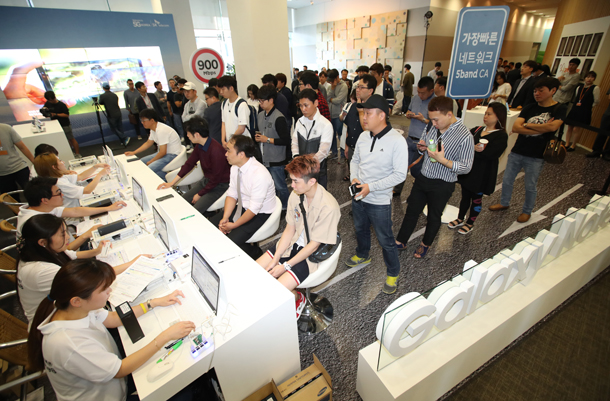 Samsung continues to ride on brand loyalty as preorder numbers for the Galaxy Note8 show roughly half of the customers had previously purchased Note phones.

While Korea’s three largest mobile carriers typically throw big events on the first day of a Galaxy phone’s official release, KT was the only one to do so this time for the Note8 on Friday, when the phone was released in 40 countries including Korea.

KT invited early-bird customers to its Gwanghwamun headquarters in central Seoul on Friday to pick up their phones and celebrate the release of the Note8. The first KT customer was 28-year-old Lim Byul, who waited outside Gwanghwamun since 4 p.m. on Tuesday to pick up the phone. The runner-up arrived just 20 minutes later than Lim, according to the telecom company.

KT gave Lim a gift package worth 2.8 million won ($2,480), including free cellular service for a year, a Samsung laptop and KT’s smart speaker, the GiGA Genie.

Two other carriers, SK Telecom and LG U+, did draw lots to select winners among preorder customers for various gifts like Samsung’s smart watch, the Gear S3, and other accessories.

Sales of the Galaxy Note8 are expected to reach over 10 million by the end of this year, according to industry analysts.

“The upgraded specs of Samsung’s flagship smartphone as well as demand from former Note7 users are expected to push up demand for Note8 phones,” said Kim Sun-woo, a research fellow at Meritz Securities.

The phone has already set records during the preorder period. On the first day, 395,000 preorders were placed, according to Samsung Electronics. The tech giant’s head of mobile, Koh Dong-jin, estimates roughly 800,000 phones were sold during the eight-day preorder period.

While the company did not disclose exact figures for global preorders, Koh said the phablet is getting positive feedback from retailers across more than 40 countries and has broken the previous record for preorders.

The Note8 was released in roughly 40 countries, including the United States and Canada, on Friday.

The market release for China is scheduled for Sept. 29, and about 150 countries are expected to get the phone.