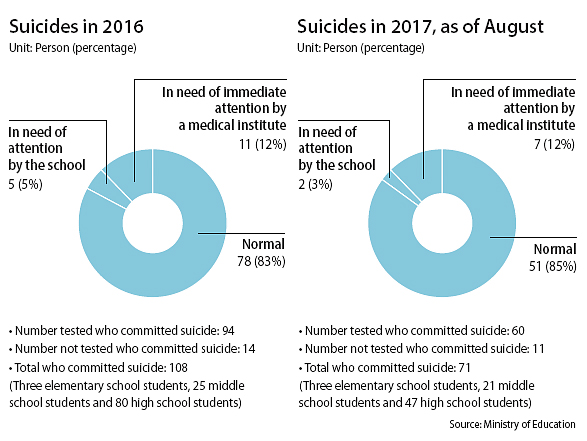 Among the 179 elementary, middle and high school students who committed suicide from last year until this August, less than 20 percent were identified as having “emotional or behavioral issues,” according to data from the Ministry of Education, obtained by Liberty Korea Party Rep. Lee Chul-gyu and exclusively analyzed by the JoongAng Ilbo.

In all, six elementary school students, 46 middle school students and 127 high school students committed suicide from January 2016 to August, among whom as many as 129, or 83.8 percent, had tested “normal” on the Education Ministry’s emotional and behavioral assessment, which includes indicators of suicidal tendencies.

While the test uses the term “normal,” mental disorders are only one kind of risk factor for suicide. Others can include sources of stress such as financial difficulty or relationship problems that psychologically healthy people can and often do endure.

Among the number of students who took their lives during this time was one high school student in Gyeonggi, who committed suicide at home in April.

The school’s report to the Ministry of Education said, “She had tried to commit suicide before,” even though she, too, had not shown any suicidal tendencies on her assessment and was marked “normal.”

Since 2012, the Education Ministry has been surveying the emotional and behavioral states of all elementary, middle and high schools students to identify students in need of counseling or medical attention.

If the female high school student in Gyeonggi who committed suicide in April had been identified by the survey as in need of immediate attention, she would have received treatment, including counseling by local education offices.

The survey contains 63 questions, which students answer by writing 0 for “not at all” up to 3 for “very much so.” Questions related to suicidal behavior include, “I have harmed myself before,” “I have thought about killing myself” and “I have planned to commit suicide before.”

There are other more general questions, as well, such as, “I have felt depressed or angry without a particular reason,” “I have caused problems because I cannot contain my anger” and “I have been bullied verbally, physically or online.”

But experts say there are problems with these surveys.

“The survey does not ask any questions about family relations and what their environment at home is like,” said Park Hyeong-min, researcher at the Korean Institute of Criminology.

“And the questions are too straightforward, like, have you thought about killing yourself? Not everyone is going to be honest in their answers. The survey needs to be improved so that it can actually serve its purpose and be more than just busy work for students.”

The Education Ministry said about 40 percent of students who committed suicide in 2015 did it at home.

“The students know why the schools are conducting these surveys and they are not always truthful in their answers,” said a counselor surnamed Park at a school in Daejeon.

“One approach that may help is to show the students a video of why they need to be honest in these answers before they take the survey.”

“Students who commit suicide show some behavioral or emotional signs before they do it,” said Hong Hyun-ju, a mental health professor at Hallym University in Gangwon. “Students need an environment where they can say what’s on their minds, and they should have people around them who can detect these signs.”

Even when the survey functions well, however, some schools have failed to prevent suicides by students who were identified as “in need of immediate attention.”

One boy in his third year at a middle school in Gyeonggi was identified in this category in a survey in his first year, but only received counseling by his teacher and did not receive any expert counseling at a Wee Center, or counseling center run by local education offices. He committed suicide at his home in December.

The Education Ministry’s data show that most schools do not have a clear idea why students commit suicide. Many school reports read, “We don’t know why the student committed suicide because the student had a very bright personality” or “We suspect the student was under academic-related stress or pressure at home over family issues.”

Even if the schools do know the reason, they may not report it truthfully in some cases. None of the reports, for instance, mentioned anything about abuse or bullying at school.

“If a student is found to have committed suicide because he or she was bullied, then the school will have to answer to authorities and take responsibility for the death,” said a former counselor surnamed Kim. “So many schools tend to keep the content of these reports vague and unclear.”