At left, His Majesty King Salman bin Abdulaziz Al-Saud, the Custodian of the Two Holy Mosques. At right is an aerial view of The Prophet’s Mosque in Madinah. [EMBASSY OF THE KINGDOM OF SAUDI ARABIA]

The Kingdom of Saudi Arabia stands proudly, side by side, with the developed countries in every fields. Under the great leadership of the Custodian of the Two Holy Mosques King Salman bin Abdulaziz, the Kingdom witnesses a glorious era and a blessed renaissance with more security and stability. 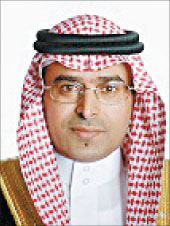 With a vision to secure the brighter and more prosperous future, the Kingdom’s “Vision 2030” was announced which has national, developmental and future plans approved by His Majesty the King.

The Vision represents a new phase of development and hard work for a better future, with the aim to keep up with the developed countries, to achieve a comprehensive development, to employ the Kingdom’s potentials and its energy, by taking advantage of the Kingdom’s strategic location, while adhering to the genuine faith of Islam and preserving the genuineness of our society and its principles.
Taking this opportunity, I would like to praise the strategic, friendship, and cooperative relations between the Kingdom of Saudi Arabia and the Republic of Korea. The two friendly countries established diplomatic ties on Oct. 16, 1962. Through a long history, the two countries witnessed various forms of friendship and cooperation in many fields, including politics, economy, education, and culture. The Republic of Korea managed to secure a safe source of crude oil, while the Kingdom of Saudi Arabia was able to obtain high quality and efficient infrastructure when the Korean firms began to enter the Saudi markets in 1973. The Korean companies have participated significantly in modernizing the Saudi basic infrastructure in 1970s and 1980s. In terms of the volume of contracts, the share of Korean companies in Saudi Arabia has reached 23 percent, which in turn assures that Korea is the first partner to Saudi Arabia in the fields of construction and reconstruction. 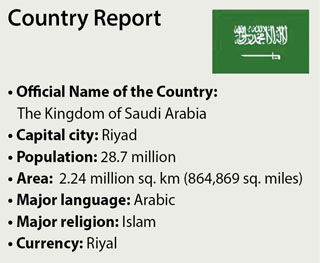 The cooperation between the two friendly countries, however, was not limited only to the fields of oil and construction, but extended to many other fields.

Given the accumulative trust built by the Korean companies in Saudi Arabia since the last century, these firms managed, recently, in securing huge project contracts in Saudi Arabia such as plants for petroleum, petrochemicals, power generation and water desalination. The two countries are seeking to expand cooperation in the fields of shipbuilding, automobiles, military industries, and renewable energy.

The bilateral relationship between the two friendly countries is considered as the model of relations among other nations as the two countries witnessed continuous development and mutual coordination in many international issues, such as combating piracy and terrorism, climate change, non-proliferation of weapons of mass destruction, including nuclear weapons, and providing mutual support for the positions and candidacies of the two countries in international bodies and organizations.

The two countries particularly pay attention to enhance the strategic relations and to increase cooperation in various fields. The Kingdom is the first supplier of crude oil to Korea, its fourth largest trading partner and the largest market for the Korean products in the Middle East.

In 2012, the two countries have celebrated the 50th anniversary of their distinguished historic friendship. On the same year, the Republic of Korea was a guest of honor at the Janadriyah Cultural Festival. This October, the two friendly countries will celebrate together the 55th anniversary of the establishment of bilateral relations. The next era will witness an increase in the level of cooperation and rapprochement as the Republic of Korea is selected as among the strategic cooperation countries within the framework of the implementation of the Kingdom’s “Vision 2030” that aims to reduce Saudi’s dependence on oil and to make development in other fields.