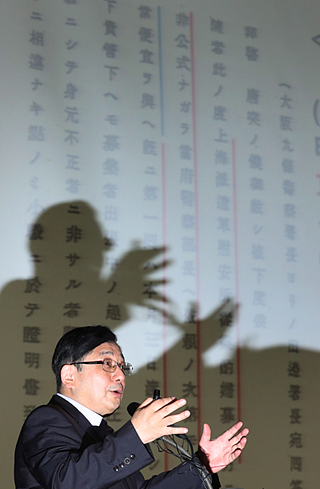 A Korean scholar of Japanese descent is translating into Korean for the first time documents that show the Japanese government operated wartime military brothels during the early 20th century.

The Japanese police documents include testimony from private contractors who said they were asked by the military to recruit 3,000 women and girls to be sent to Shanghai in December 1937.

Yuji Hosaka, who heads the Dokdo Research Institute at Sejong University in Seoul, is currently working with his team to translate the materials, originally published in 1997 by the Asian Women’s Fund, which was set up by the Japanese government in 1994 to “extend atonement from the Japanese people to the former comfort women.” The fund was disbanded in 2007.

The full collection of these documents has never been translated into Korean before. Hosaka, who acquired Korean nationality in 2003 after living 15 years here, said Tuesday during a press conference that the finding was from a collection of materials relating to the “comfort women” issue. He added that his team plans to publish the Korean translations soon after they are complete.

“When Seoul and Tokyo signed their mutual comfort women deal in 2015,” he said, “the Japanese government dodged legal accountability and the Korean government went ahead anyway, because aside from testimony from Korean victims, Seoul lacked specific data.”

But Hosaka claims that the documents published by Japan prove the Japanese government was involved in establishing and running the military brothels, and therefore Tokyo is legally responsible for Japanese wartime sexual slavery.

One Japanese police report, dated Jan. 19, 1938, describes how officers arrested military contractors who “kidnapped” little girls and women to be sent to Shanghai. By then, about 200 to 300 people had already arrived in the Chinese city, the police wrote, citing testimony from contractors, who added that the Japanese government “cooperated” in running the sex parlors.

In another document from Feb. 7, 1938, the contractors reportedly told police that 3,000 prostitutes were sent to Shanghai with the help of Sadao Araki, an Imperial Japanese Army general, and Mitsuru Toyama, a nationalist political leader who founded the Genyosha, an ultranationalist group. A senior police officer in Osaka was quoted as saying at that time that the Home Ministry, which mainly oversaw local administration and police, ordered another Osaka senior police officer to help with the recruitment.