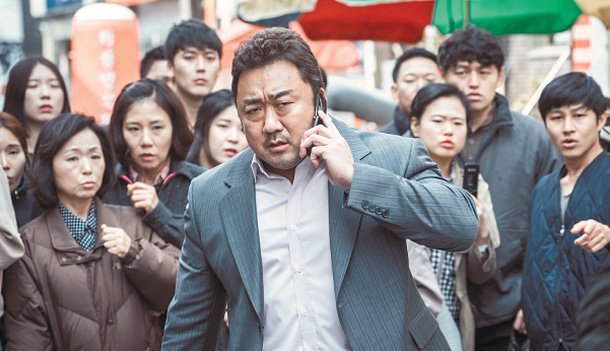 Filmmakers never seem to get tired of the muscular actor Ma Dong-seok, who has had major roles in a number of recent action hits including “Derailed” (2017) and “Train to Busan” (2016). Continuing his streak, Ma stars in the upcoming action-packed movie “The Outlaws,” which is slated for release next month.

Directed by Kang Yun-seong and co-starring Yoon Kye-sang, the flick revolves around a merciless boss (Yoon) from a Korean-Chinese crime organization headquartered in Harbin, northeast China, who is willing to commit any crime for money, and a police detective (Ma) who tries to catch the ruthless criminal and his henchmen.

“Ma Dong-seok and I are friends. So four years ago, we created the character Ma Seok-do to best suit the actor after long discussions at Ma’s place,” said the director at a press preview held on Wednesday in central Seoul. “I have thought about making the film into a franchise if it [performs] well.”

“I mulled over how to keep the character within the boundaries of reality and fantasy,” Ma continued.

“I’ve depicted the kind of detective that I wanted to, and I think I can proudly show the movie to real detectives.”

Yoon, who plays a villain for the first time, was cast to play the role because of his performance in “Poongsan” (2011), according to the director.

“I had a strong impression of Yoon after watching ‘Poongsan,’ which made me see a new side of the actor. But he wasn’t the villain in the film, and I thought I would be able to pull out something new from the actor if he played a villain,” the director said.

Regarding his character, Yoon said, “Playing [a villain] for the first time, it didn’t feel so good. I felt guilty after returning home .?.?. I thought a lot about how to look bad and scary. I watched a lot of [horror] movies to learn how to exude unearthly spirits.”