Burning the house to kill the mice

Burning the house to kill the mice 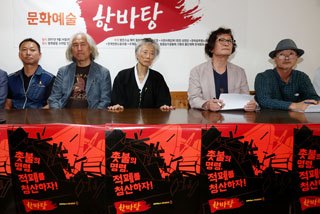 Civic leaders call for the end of “long-standing evils” in Korea. [YONHAP]

When I ask Japanese correspondents in Seoul how life in Korea differs from life in Japan, they often say, “Senior reporters who know Korea well have advised that we shouldn’t look at Korea with Japanese standards or from a Japanese perspective.” Once they start feeling uncomfortable living in Seoul, they suffer more.

They experience scenes that are hard to fathom in Japan — people talking loudly on the phone, commuters not apologizing when they bump into each other, taxi drivers playing the radio on high volume — so they try to respect cultural relativity as much as possible. My face boils when I hear these stories.

But lately, Japanese correspondents are finding the political relativity more surprising than cultural relativity. Amid North Korea’s provocations, the administration in Seoul is pushing for the eradication of “long-standing evils.” It is a spectacle for Japanese reporters unaccustomed to reshuffles when the administration changes. I am not sure how to respond to specific questions like “Who decides what ‘long-standing evils’ are?” and “Is someone who thrived during the Lee Myung-bak administration, but not under Park Geun-hye, considered evil or not?”

The Ministry of Foreign Affairs, which handles diplomacy and deals with North Korea’s threats, is about to make some appointments for mission chiefs and department heads, and the organization is beset by speculation. Do people who served key positions under presidents Lee and Park fall into the category of long-standing evils? Are those who worked for Lee and Park but then picked up by this administration competent? Is it okay to have a family member who worked with Lee? Will those people who were excluded during the liberal Roh Moo-hyun administration be relegated to trivial positions? And what about the rumor that 30 percent of envoy positions will be occupied by those who contributed to Moon Jae-in’s election victory?

The foreign minister is fully supported by the administration, but someone inside the Blue House criticized her for inviting former foreign ministers who were on the other side of President Moon during the campaign. I am concerned that the administration’s hunt for long-standing evils could burn the house instead of getting rid of the mice, all the midst of a historically unprecedented security crisis.

*The author is deputy political news editor at the JoongAng Ilbo.