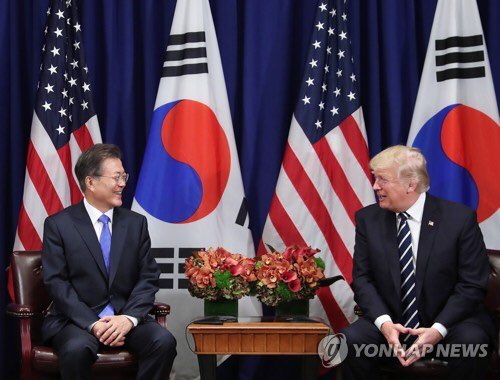 During their summit on the sidelines of the U.N. General Assembly in New York, they underscored the need to maintain overwhelming deterrence against North Korea, presidential spokesman Park Soo-hyun said at a press briefing.

To this end, they agreed to strengthen their countries' joint defense capabilities, partly through Seoul's acquisition and development of "the most advanced military assets," Park said.

"The two leaders shared a view on the need for the strongest pressure and sanctions against North Korea to deter North Korea's provocative activities and make it start taking steps toward denuclearization," he said.

Earlier reports suggested the leaders were set to announce an agreement for Seoul's acquisition or development of nuclear-powered submarines, a strategic asset that could counter North Korea's submarine-launched ballistic missiles. Seoul earlier dismissed the reports.
The Blue House spokesman refused to confirm whether Seoul's acquisition of the most advanced military assets would include nuclear-propelled submarines.

Their second bilateral summit was watched closely as it came two days after Trump warned of a possible military action against Pyongyang.

In his first address to the U.N. General Assembly, also attended by North Korea, the U.S. leader said his country will have no choice but to "totally destroy North Korea" if forced to defend itself or its allies.

Moon expressed satisfaction with what he called the United States' "firm" reaction to the North's latest nuclear provocation.

"North Korea's latest provocation is very deplorable, and it greatly outraged us, but the U.S. firmly and greatly responded and I am very satisfied that cooperation between South Korea-U.S. was realized without any gap," he said while meeting with Trump, according to pool reports.

"President Trump has also delivered a very powerful speech at the U.N. General Assembly and I am confident such power will certainly change North Korea," he added.

Immediately following their bilateral summit, Moon and Trump were joined by Japanese Prime Minister Shinzo Abe for a three-way summit over lunch.

"The three leaders noted North Korea's nuclear and missile development posed a grave threat to peace in Northeast Asia and the world and that they cannot accept this," South Korean Foreign Minister Kang Kyung-wha told a press briefing.

"Under such understanding, the leaders of the three countries agreed on the need for the international community to put maximum pressure and sanctions to the level that North Korea cannot withstand and voluntarily come to the dialogue table," she added.
Yonhap