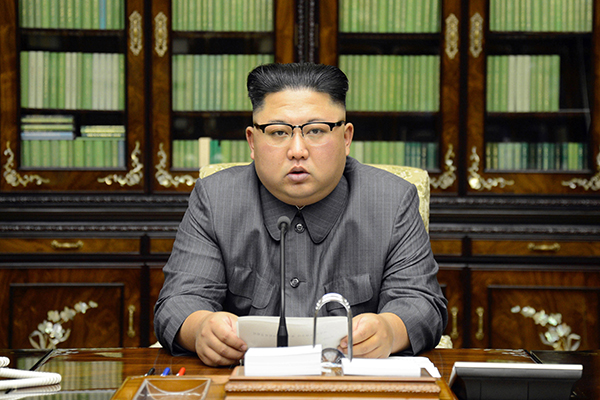 North Korea may test a hydrogen bomb in the Pacific Ocean to respond to U.S. threats of military action, Pyongyang’s foreign minister said, just hours after the dictator of the isolated regime issued a warning of “highest-level” action.

“I do not know what measure it will be, because the decision will be made by our Dear Respected Comrade [Kim Jong-un], the chairman of the State Affairs Commission,” said North Korean Foreign Minister Ri Yong-ho on Thursday in New York. Ri is scheduled to address the United Nations General Assembly later this week. “Probably it will be a test of a most powerful hydrogen bomb in the Pacific.”

Ri was speaking to reporters about a statement by the North Korean leader released early Friday morning saying Pyongyang will take the “highest level of hard-line countermeasure in history” to retaliate for recent remarks by U.S. President Donald Trump.

In his first address to the UN on Tuesday, Trump vowed to “totally destroy North Korea” if the United States was forced to defend itself or its allies. He also mocked Kim by calling him a “Rocket Man” on a suicide mission.

Kim issued a statement threatening retaliation. “Now that Trump has denied the existence of and insulted me and my country in front of the eyes of the world and made the most ferocious declaration of a war in history that he would destroy the [North Korea],” he said, “we will consider with seriousness exercising of a corresponding, highest level of hard-line countermeasure in history.”

According to the state-run Korean Central News Agency, Kim issued the statement under the title of “Respected Supreme Leader” and “chairman of the State Affairs Commission” on Thursday.

Labeling Trump a “mentally deranged U.S. dotard,” Kim said his UN speech on Tuesday was proof of why North Korea needs nuclear and missile programs. “His remarks ... have convinced me, rather than frightening or stopping me, that the path I chose is correct and that it is the one I have to follow to the last,” Kim said.

On Sept. 3, the North conducted its sixth and the most powerful nuclear test at an underground facility of the Punggye-ri nuclear site. The North claimed that it successfully tested a hydrogen bomb that can be placed on an intercontinental ballistic missile.

Until now, the North conducted all its nuclear tests at underground facilities. Ri’s remark suggests that the North would fire an intercontinental ballistic missile tipped with a hydrogen warhead into the Pacific Ocean. North Korea experts said the United States would never tolerate such a test and a military conflict is possible if the North actually carried one out.

Kim said his statement was “not a rhetorical expression” and that Trump will “pay dearly” for the UN speech.

“I am now thinking hard about what response he could have expected when he allowed such eccentric words to trip off his tongue,” Kim said. “Whatever Trump might have expected, he will face results beyond his expectation. I will surely and definitely tame the mentally deranged US dotard with fire.”

Seoul asked North Korea and other involved parties to refrain from taking any action that will further escalate hostility. Speculation grew that the North will actually follow through with the threat because Kim directly made the warning. The Rodong Sinmun printed Friday a photo of Kim reading the statement from the Workers’ Party’s Central Committee building on its front page.

According to Unification Ministry spokesman Baik Tae-hyun, it was the first time that the North issued a statement under the title of the “Supreme Leader” and the “chairman of the State Affairs Commission,” indicating Kim’s personal determination.