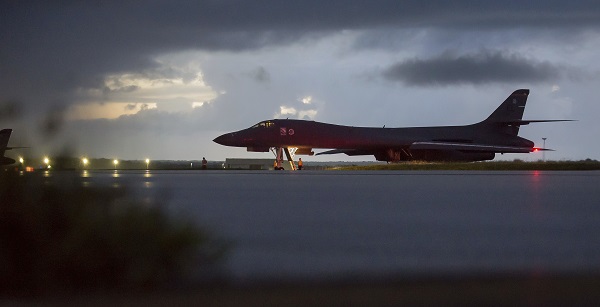 In this photo made available by the Department of Defense, a U.S. Air Force B-1B Lancer, assigned to the 37th Expeditionary Bomb Squadron, deployed from Ellsworth Air Force Base, S.D., prepares to take off from Andersen AFB, Guam, on Saturday. The Pentagon says B-1B bombers from Guam and F-15 fighter escorts from Okinawa, Japan, have flown a mission in international airspace over the waters east of North Korea. [AP/YONHAP]

The U.S. Department of Defense announced later that day that the bombers flew from Guam, escorted by F-15C Eagle fighters from Kadena Air Base in Okinawa, Japan, to international airspace over waters east of North Korea.

“This is the farthest north of the demilitarized zone (DMZ) any U.S. fighter or bomber aircraft have flown off North Korea’s coast in the 21st century,” said Pentagon Spokesperson Dana White, “underscoring the seriousness with which we take reckless behavior.”

“This mission is a demonstration of U.S. resolve and a clear message that the President has many military options to defeat any threat,” White said, underscoring the “grave threat” that the North’s weapons program poses to the Asia-Pacific region and the international community.

She continued, “We are prepared to use the full range of military capabilities to defend the U.S. homeland and our allies.”

South Korea’s Blue House said Sunday in a statement that the flyover of the B-1B bombers near the military demarcation line “came with close cooperation between South Korea and the United States.”

The South Korean Air Force did not accompany the B-1Bs this time around, according to the Blue House, because the U.S. bombers flew over international airspace.

President Moon Jae-in and Trump agreed in their bilateral summit Thursday, on the sidelines of the UN General Assembly in New York, that the U.S military will expand rotational deployments of strategic assets to the South and neighboring areas, which could include B-1B bombers, F-35B stealth fighter, nuclear-powered aircraft carriers and nuclear-powered submarines.

On Saturday, Trump tweeted, “Just heard Foreign Minister of North Korea speak at U.N. If he echoes thoughts of Little Rocket Man, they won't be around much longer!” This came after he threatened to “totally destroy” North Korea in his address to the UN General Assembly Tuesday.

North Korea's Foreign Minister Ri Yong-ho said Pyongyang may test a hydrogen bomb in the Pacific Ocean during his trip to New York for the General Assembly.

“We can't have mad men out there shooting rockets all over the place,” said Trump in a rally in Arizona Friday. “Rocket Man should have been handled a long time ago."

He added, “I'm going to handle it because we have to handle it,” warning of North Korea’s threats of “a massive weapon exploding over…the Pacific Ocean, which causes tremendous, tremendous calamity.”

In another tweet Friday, Trump called Kim Jong-un “a madman who doesn't mind starving or killing his people,” and added that he “will be tested like never before!”

But military action on North Korea would “ultimately” be Trump's decision, according to U.S. State Secretary Rex Tillerson.

“We will continue our efforts in the diplomatic arena but all of our military options – as the president has said – are on the table,” Tillerson told ABC News’ “Good Morning America” Saturday. “Once we can assess the nature of this threat, the president will make a decision regarding the appropriate actions.”

When asked how the United States would respond if North Korea drops a hydrogen bomb on the Pacific, Tillerson said, “That will be the president's decision,” adding “there is assembled on a standing basis a National Security Council that meets on each of these issues to advise the president.”