Dedicated to showing the dynamism of the double bass

Dedicated to showing the dynamism of the double bass 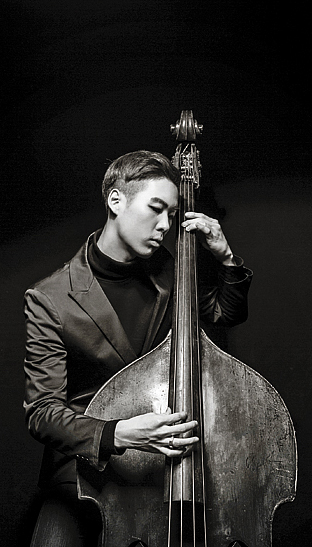 Double bassist Minje Sung will hold a recital on Oct. 7 at the IBK Chamber Hall of the Seoul Arts Center in southern Seoul. [YOON6]

The double bass is the biggest of the string family of instruments - usually weighing nearly 30 kilograms (66 pounds) and with a height taller than most grown men. But whenever there’s an opportunity to prove that it is more than merely an instrument that sits at the rear of an orchestra pit, playing a few bass notes for support, Minje Sung, 27, jumps at the chance.

In an attempt to bring attention to the double bass, Sung has made an effort to perform as much as he can - accompanying renowned orchestras, holding solo concerts and even starring in a documentary film titled “Ensemble” (2012), directed by Lee Jong-phil.

If familiarizing the instrument for Koreans has been Sung’s focus so far, he says it’s time to take it to the next level and introduce music written to show off the beauty of the double bass.

Titled “Originality,” Sung says he will attempt to highlight the strengths of the double bass in his upcoming recital by performing music solely written for the double bass.

“So far, when I have held recitals or had the opportunity to perform solo, I have mixed into the program music written for other instruments like the cello, which I can play on the double bass, since audiences are more familiar with songs like Brahms’ ‘Sonata for Cello and Piano’ than sonatas for the double bass,” he said. “But I feel that now it is time to have Korean audiences hear the originality of the instrument through diverse repertoires.”

At Sung’s concert at the Sejong Center for the Performing Arts in March, for example, he was accompanied by other instruments such as the piano, a violin and a bass guitar, performing various genres ranging from classical to jazz. The intention was to “show the audience the many faces of the double bass and how it can pull off diverse techniques and produce different sounds when performed alongside different instruments,” Sung explained.

But for his upcoming recital, he’ll only be accompanied by a piano, which will be played by pianist Chyung Han-bin.

As the first Asian winner of the International Johann Mattihias Sperger Competition for Double Bass in 2006 and the International Serge Koussevitzky Double Bass Competition the following year, Sung made a name for himself both at home and abroad. But since then, it’s been difficult to see any other young double bassists coming home with such achievements, making it a lonesome task for Sung to show the charm of the double bass as a solo instrument.

“Compared to when I was a student, there are so many young Koreans majoring in the double bass,” said Sung. “So I believe my job now is to let more people learn about the beautiful sounds that the double bass can make as a solo instrument and pave the road for younger double bassists and let them know that a double bassist can become a well-established solo artist as well.”