DP demands a probe into Lee over 2012 election

DP demands a probe into Lee over 2012 election 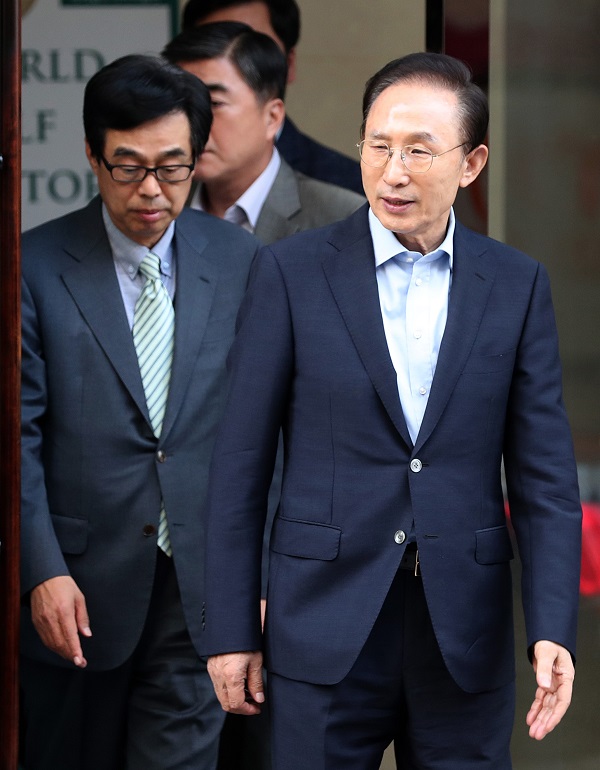 Calling former President Lee Myung-bak the mastermind behind the military cyber command’s efforts to help Park Geun-hye win the 2012 presidential election, the ruling party on Monday demanded a formal investigation into Lee and his aides.

“Lee made a direct order to the Cyber Command of the military to increase the number of civilian employees,” Rep. Woo Woo Won-shik, floor leader of the ruling Democratic Party, said Monday at the party’s leadership meeting. “The Blue House received a daily report from the command’s operation. In addition to the suspicions that the Lee administration mobilized intelligence agencies to manipulate public opinions, we cannot delay an investigation into Lee and former Defense Minister Kim Kwan-jin.”

Woo’s remark was based on a document revealed by another Democratic Party lawmaker, Rhee Cheol-hee. The document of the Ministry of National Defense, created in March 2012, was titled as the “Outcome of a meeting with BH on Cyber Command.” BH refers to the Blue House.

Kim, who was the minister of national defense at the time, signed the document. He later served as the head of the National Security Office in the Park Blue House.

The document stated that Lee made the specific order to increase civilian workers for the cyber command. In ordinary years, the command hires seven to eight civilian employees, but 79 were hired that year. Among them, 47 were assigned to 530 cyber warfare unit, which ran online smear campaigns against Moon Jae-in and liberal politicians on the eve of the 2012 presidential election. Moon was narrowly defeated by Park.

“It is a clue that the Blue House masterminded the government-level operation to influence domestic politics and elections,” Rep. Rhee said. “When the cyber smear campaign was first investigated in 2013, the involvement of Kim and the Blue House were suspected, but no progress was made. Since we have clear evidence now, they must be investigated.”

On the eve of the 2012 presidential election, then opposition Democratic Party claimed that the National Intelligence Service (NIS) was running an online smear campaign against Moon to help Park win the race. Just three days before the election, the police announced a preliminary conclusion and cleared the spy agency from the charges.

In the following year, the police and the prosecution concluded that the NIS did operated cyber campaign against Moon. Its former director, Won Sei-hoon, and other officials were prosecuted.

An internal investigation also took place by the Ministry of National Defense into the allegation that the Cyber Command also meddled in the election. It concluded that its agents breached their political neutrality by posting thousands of political comments online during the presidential race, but denied any sort of systemic order from its upper chain of command.

While no further probe took place into the cyber command, Won, who headed the NIS from 2009 to 2013, was found guilty of violating the law governing the spy agency and elections. He was sentenced to four years in prison in a retrial at the Seoul High Court last month, and appealed the verdict to the Supreme Court.

The prosecution also suspects that the NIS, under Won’s leadership, ran a wide rage of domestic operations to sway public opinions. Seoul Mayor Park Won-soon was allegedly attacked under the program.

A blacklist of celebrities and cultural figures critical to the Lee administration was reportedly created for systemic oppression. The NIS was also accused of influencing broadcasters and stimulating public opinions to pressure then Supreme Court Chief Justice Lee Yong-hoon, appointed during the liberal Roh Moo-hyun administration, to step down.

According to Yonhap News Agency, the prosecution also plans to question Won for his alleged one-on-one meetings with Lee. The investigators will question him if he had briefed Lee about the alleged illegal activities of the NIS.

After Moon took office in May, the NIS formed a task force and conducted an internal probe into the agency’s past wrongdoings.

The NIS said last month that the agency was ordered by the Blue House in 2011 to use social network services to promote the Lee administration’s state affairs.

The agency created a report on the assessment of the social network services’ power to influence elections and sent it to the Blue House.

The prosecution also raided Monday homes of two former NIS officials, who served as bureau chiefs during the Lee administration.
Homes of Choo Myeong-ho and Shin Seung-gyun were raided on charges of running operations to attack Seoul Mayor Park and creating a cultural blacklist.

A group of celebrities and cultural figures also filed a petition to the Seoul Central District Prosecutors Office on Monday to demand an investigation into the blacklist of the Lee administration.

They asked the prosecutors to investigate Lee and Won as well as Park and her government officials, claiming that the oppression continued over the past decade.

Eighty-two cultural figures were on the blacklist, the NIS’s internal probe showed. The list was first created in July 2009 and continued to grow.

As the ruling party and the Moon administration target the Lee administration, the main opposition Liberty Korea Party (LKP) counters the probe as a political retaliation. “The Moon administration says it wants to eradicate the accumulated evils of the past, but it is actually repeating it,” Rep. Chung Jin-suk of LKP said. Chung once served as the senior political affairs senior secretary of the Lee Blue House.
Chung has been under fire for his earlier comment on the late President Roh Moo-hyun, the political mentor of President Moon and the predecessor of President Lee.

Roh committed suicide in 2009, while he was being investigated by the prosecution over a bribery scandal.

After Seoul Mayor Park recently said Lee had politically attacked Roh, Chung argued that Roh committed suicide after a fight with his wife.
The Democrats fiercely condemned Chung for the comment.