Do assures counterparts Olympics will be safe

Do assures counterparts Olympics will be safe 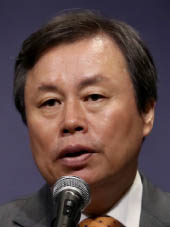 Do Jong-hwan, minister of culture, sports and tourism, will have Korean ambassadors in other countries meet with any local cultural ministers who so desire to discuss the safety of athletes coming to Korea for the 2018 PyeongChang Winter Olympics.

Do announced his decision Tuesday at a press conference marking his first 100 days in office, after France’s sports minister reportedly said last week France may not participate in the Games due to political tensions. France later confirmed it would participate.

“Austria and Germany also showed concerns so we explained in person,” said Do, adding that the ministry hopes to prevent a “domino effect” of athletes withdrawing from the Games. “It is important for us to show the world we can hold this event safely, so we will actively work with and visit countries that express worries.”

One year before Seoul hosted the 1988 Summer Olympics, two North Korean agents bombed Korean Air Flight 858, killing 115 people. One of the agents, Kim Hyon-hui, survived and later testified the attack had been partly intended to disrupt the Games.

The minister also commented on other issues involving the cultural ministry, including bolstering the tourism sector, which has been hit by China’s retaliation to the Terminal High Altitude Area Defense, or Thaad, and a blacklist of artists critical of the government.

With talks rising over another blacklist of artists under the Lee Myung-bak administration, the Ministry of Justice recently dispatched one prosecutor to the cultural ministry who confirmed the case could end in criminal court.

“I recently went to see a play by performers with disabilities, and learned that the group has not gotten any support since it was put on the blacklist,” said Do. “It broke my heart. There shouldn’t be any surveillance, discrimination or restriction against any artist.”

He also noted the difficulty of resolving the Thaad issue.

“Because of Thaad, Lotte Hotel saw about a 70 billion won [$61.5 million] deficit,” he said, adding that both big and small companies have been hit.

“This is something to be resolved through political and military talks, so I feel sorry that we don’t have any other ways to help than allowing loans to tourism or content industries.”

He also said the focus on cultural contents will continue, especially with the arrival of the fourth industrial revolution, as cultural services will be intertwined with technologies like virtual reality and augmented reality.

“There will be more focus on how one reads, thinks, feels and creates,” he said, “so the talk on how to develop culture and arts will be continued.”