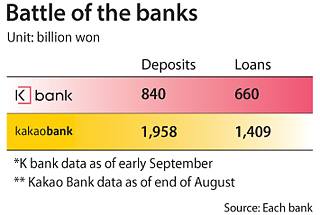 Despite being the latecomer, Kakao Bank has overtaken K bank to be the larger of the two internet banks, thanks to its connection with the country’s most popular messaging app, Kakao Talk. Just a month after launching in late July, Kakao Bank received around 1.95 trillion won ($1.71 billion) in deposits and issued 1.41 trillion won in loans.

K bank, by comparison, has raked in just 840 billion won in deposits as of early September, five months after launching in April, and handed out 660 billion won in loans.

“We cannot match the brand power that Kakao has, given its messaging app is used by essentially everyone in Korea,” said Shim Sung-hoon, president of K bank, “but I believe our path will be different. K bank will focus more on the loyal customers who stay with us and provide them with services like personal asset management no matter the size of assets.”

The bank plans to add mortgages to its list of products by the end of this year. “It will be the first mortgage in Korea that’s completely distributed on mobile,” said Ahn Hyo-jo, in charge of operations at the bank. He added that potential borrowers will be able to take out mortgages from the internet bank even on weekends.

While the bank is finally throwing its hat into the mortgage market, some analysts remain skeptical that it will help boost K bank’s fortunes, especially considering the government’s continuous crackdown on the real estate market.

In early August, the Moon Jae-in administration implemented its toughest real estate regulations yet in an effort to cool an overheated market. It plans to announce more policies to curb rising household debt, a majority of which comes from mortgages.

“Mortgages will be limited in the future due to related policies from the government,” said Kim Eun-gab, an analyst at IBK Securities.

The analyst advised that internet banks should focus more on issuing so-called midrate loans, which cater to borrowers with credit ratings ranging from four to eight on a scale of 1 to 10 where 10 represents the worst credit.

There are more hurdles that K bank has to overcome, including allegations that it may have received favor from the previous administration, Park Geun-hye, during the approval process.

K bank was created through a consortium led by telecom company KT, which came under fire for possible involvement in the corruption scandal that led to Park’s arrest. The Financial Services Commission is set to begin an investigation into the case.