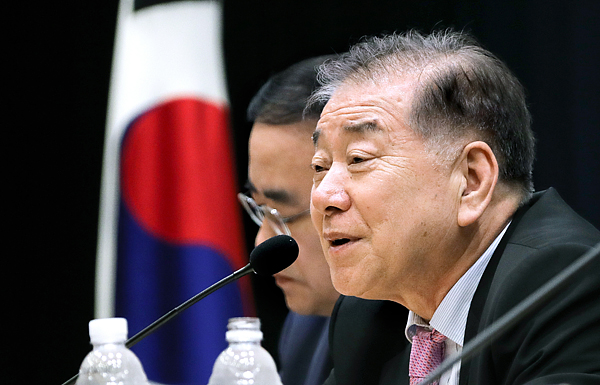 A war against North Korea “cannot happen” even if “the Korea-U.S. alliance breaks down,” said Moon Chung-in, presidential special adviser on foreign affairs and national security, speaking at a panel on how to resolve the Korean Peninsula crisis hosted by the East Asian Future Foundation in Seoul Wednesday. His remarks come after U.S. President Donald Trump threatened to “destroy” North Korea if necessary last week at the UN General Assembly.

“It is considerably worrisome if U.S. strategic bombers cross the Northern Limit Line (NLL) and return without plenty of consultation with our government,” added Moon, who is also a professor emeritus of political science at Yonsei University.

The NLL is the de facto maritime border between the two Koreas.

On Saturday, the United States flew its Air Force B-1B Lancer strategic bombers over international airspace over waters east of North Korea, the farthest north of the demilitarized zone (DMZ) it has flown this century, according to the Pentagon.

“There is concern that the biggest crisis could be an accidental or deliberate clash between North Korea and the United States,” Moon said, “which develops into a nuclear war rather than a conventional one.”

Sohn Hak-kyu, a former Democratic Party chairman and former Gyeonggi governor, said in a keynote address to the forum, “In order to fundamentally resolve the crisis on the Korean Peninsula, there needs to be a major change in the way of thinking .?.?. This is to recognize North Korea essentially as a de facto nuclear state as in the case of India and Pakistan.”

Sohn continued, “North Korea’s nuclear capability has now become a reality that cannot be reversed. The United States, as it demands that North Korea scrap its nuclear program, can choose war, but we need to prevent any sort of war on the Korean Peninsula.”

Moon agreed, and added, “It is not realistic to say we will not have dialogue with North Korea until it denuclearizes when it already possesses a great amount of nuclear capability.”

During a lecture Tuesday marking the Oct. 4 inter-Korean summit, Moon also remarked that the United States “was extremely uncomfortable” about the Moon Jae-in government’s overture for military talks with North Korea back in July. The North did not respond to this gesture.

He added, as he spoke at the 63 Convention Center in Yeouido in western Seoul, “U.S. Secretary of State Rex Tillerson strongly protested this to South Korean Foreign Minister Kang Kyung-wha.”

The special adviser’s remark on the Korea-U.S. alliance has created a backlash from opposition lawmakers. Liberty Korea Party Chairman Hong Joon-pyo criticized Moon’s perception of North Korea issues and remarked in a Facebook post, “such rash remarks are beyond astonishing and send shivers down my spine.”

Rep. Lee Yong-ho, chief policymaker of the People’s Party, said a “shakeup of the foreign affairs and security lineup is urgent, but before that, there should be a gag order.”

Moon previously suggested that if North Korea suspends its nuclear and missile activities, the South could consult with the United States to scale down joint military exercises and reduce the deployment of U.S. strategic weapons to the South, speaking at a think tank in Washington in June.

His remarks stirred controversy, especially as it came ahead of President Moon Jae-in’s first summit with U.S. President Donald Trump in Washington later that month.

When asked to explain about Moon’s remarks concerning Tillerson, the Ministry of Foreign Affairs here replied it happened in the usual exchange of opinions. Noh Kyu-duk, spokesman of the Korean Ministry of Foreign Affairs, said in a briefing Thursday, “There have been frequent close consultations between the South Korean foreign minister and U.S. state secretary, and this is a part of the usual process of dialogue between our foreign affairs leaders and the process of exchanges of opinions.”