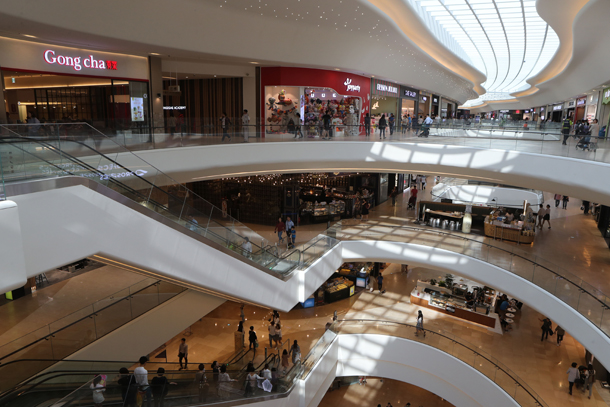 Starfield Goyang in Gyeonggi, run by Shinsegae, could be dealt a blow by regulations regarding its hours of operation. [YONHAP]

Five years ago, a bill passed mandating that all discount chains take two days off per month to revive local traditional markets and sustain smaller vendors.

Legal disputes over its constitutional legitimacy continued for two years, but the final verdict ruled against discount chains.

The same controversy is resurging, as congress members of the ruling party proposed a bill on Sept. 29 to expand operation regulations to other big retail channels, including shopping malls, duty-free shops and outlets.

The proposed bill will be a revised combination of around 30 retail-related proposals made since last June, when newly elected lawmakers entered the National Assembly. 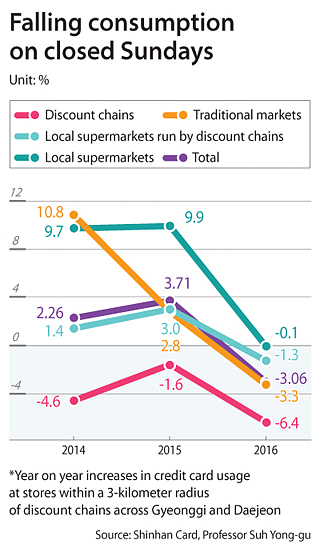 One issue receiving a lot of attention from industry insiders is a regulation to oblige complex malls to take two weekend days off per month. This will be the first such regulation, as it involves a retail channel that hardly existed in Korea until five years ago.

Creating legislation targeting such facilities was one of President Moon Jae-in’s major pledges during the election campaign.

In the last two years, shopping malls were noted as an alternative to department stores and discount chains for large retail conglomerates, which saw sales drop in the 2010s due to the sluggish domestic economy and success of e-commerce.

Such malls position themselves as family-outing places rather than commercial facilities, which is why they are packed with entertainment and sports venues. Therefore, closing down two Sundays a month, when parents do not go to work, can be critical. Starfield’s most recent branch in Goyang, for example, has devoted 30 percent of its store to non-shopping activities. The underlying hope is that if consumers spend more time there, they will make purchases.

“Twice a month means 24 days per year,” said a source working in one of the operations noted above. “It’s almost like closing down a whole month, which generates 25 percent of weekly revenue. This means less work, so the work force also must be cut.”

But small local merchants welcome tightened regulations on major retail complexes. In a survey conducted by the Korea Federation of SMEs in May, 66 percent out of 400 local merchants in Suwon, Eunpyeong, Hanam and Pangyo, all sites for conglomerate-run mall complexes that are said to have been badly affected after the establishment of local malls.

Another report from the Korea Small Business Institute pointed out that commercial districts within 5 kilometers (3.1 miles) of a mall complex saw sales increases after malls were built, but that old merchants went out of business. Shops farther out, but within 10 kilometers, reported a sales decline.

“Complex malls affect a very large commercial area,” said Jung Soo-jung, a researcher at KOSBI, “even larger than discount chains, which is why I believe complex malls should not be located inside the metropolitan district, but rather in rural districts where commerce is less developed, like Starfield Hanam.”

Meanwhile, the effectiveness of forcing discount chains to take obligatory days off on the weekend twice a month is still under question, with academic papers showing conflicting results.

Government statistics until 2014 showed that revenue at small local merchants and traditional markets rose 10.4 percent compared to before the regulation took effect.

But a research by Suh Yong-gu, professor of business management at Sookmyung Women’s University, showed there was an uplift of credit card consumption for traditional markets and local supermarkets near discount chains until 2015, but fell since 2016, along with a general decline of credit card use across every retail channel in the region.

“The results imply that discount chains and local vendors are in the same boat,” said Suh. “Large retail channels lure families out of their homes, and once they’re out, these people visit neighboring vendors, as well.”

Academics point out that the policy to regulate major retailers in favor of local vendors and SMEs is based on a narrow viewpoint, because the retail industry is going through a larger change, and both are losing out.

“What we see in the Korean retail industry today is not a conflict of interest between big versus small brick-and-mortar operations,” Suh added. “People nowadays don’t go to traditional markets if you close down discount chains. They go to a nearby convenience store or log onto Coupang.”

Suh added, “U.S. academics discussed the Walmart effect for two decades, looking at whether they bring down local stores. They couldn’t come up with a clear conclusion, but it’s no longer a research subject anyway. The new research theme is Walmart versus Amazon.”

Gim Jin-guk, professor of corporate consulting at Pai Chai University, said discussing the policy with regard to only two stakeholders, conglomerate complex malls and local merchants, ignores the question of consumers’ quality of life.

“A lot of families go to complex malls to find a place to entertain their children,” said Gim. “You can’t just tell them to stop going somewhere they’ve already experienced as fun and that serves their needs. You can’t change a trend with policy.”

Gim further underscored the fact that limiting hours of operation will just cause inconvenience to consumers, leaving nobody happy, including local SMEs.

Experts say rather than twisting the arms of retail conglomerates, government policies should incentivize them with plans that provide mutual benefit to local vendors, or support SMEs with tools like marketing, design or opening sales networks.

“In the short term, the government may be able to keep small vendors afloat,” Gim added, “but policies like this cannot boost their market competence. What’s better is to create a favorable business environment for them. The current approach can eventually prompt the whole retail industry to slow down at a time when consumers are moving online and frontiers no longer exist in terms of shopping.”