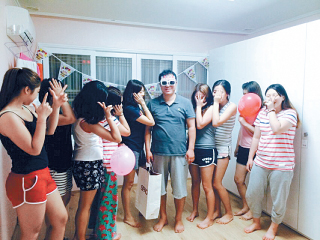 Pastor Yim Yun-taek, referred to as “father” at Dungji Youth Rehabilitation Center in Busan, at a party with other juvenile offenders who were placed there as part of a community residence program. [DUNGJI YOUTH REHABILITATION CENTER]

With the recent cases of juvenile crimes receiving media attention, some are calling for stricter measures while others have proposed juvenile reformation, leading to a surge of interest in youth rehabilitation centers.

Senior Judge Cheon Jong-ho of the Busan Family Court proposed the establishment of a youth rehabilitation center in 2010. The plan is to have the court consign juvenile offenders to civilian-run centers, and in exchange custodians receive funding support.

One of those to have experienced the program is Park Yu-bin, 16, who attacked her classmate “out of impulse.” The juvenile court ruled she was to be placed in the care of a guardian for at least six months.

The Busan Family Court relocated Park to the Dungji Youth Rehabilitation Center in Geumjeong District, Busan. Named after the Korean word for nest, Dungji is a community residence program for female youths who have been remanded to formal supervision, like Park. The center was founded in April 2014 on the suggestion of Judge Cheon, and is run by its 49-year-old custodian, Pastor Yim Yun-taek, and his wife.

Dungji hosts 8 to 10 adolescent girls ages 16 or 17, who call the Yim couple “mother” and “father.” The pastor says these children committed acts of violence, fraud or prostitution because they had received no attention. “The school labelled them delinquents and their own parents offered no guidance,” said Yim.

The daily schedules for these girls starts at 8 a.m. and ends at 11 p.m. Some residents attend schools while the rest spend their time in a weekly book club, being mentored by college students or preparing for Korea’s general education development (GED) tests.

Every Tuesday, the girls gather with other juvenile offenders in Busan for choir practice.

Visiting hair salons or using smartphones on the weekends is allowed, if Yim permits it.

“It’s difficult because we can’t go out late at night, drink or smoke, but being close to everyone makes it a bit better,” said Park. It feels like a summer camp, Park added, but said on a more serious note that she does not want to disappoint anyone again after being released.

Runaways are infrequent, as the youths here understand it would lead to longer probation and other harsher methods. “The regular schedules without late-night outings have made me fatten up,” another resident said, “but it does remove the temptation to do something wrong.”

After Judge Cheon founded his first community residence program in Changwon, South Gyeongsang, in 2010, the recidivism rate for juvenile offenders who completed the program steadily declined from 11.65 percent in 2012 to 9.57 percent in 2013 and 8.51 percent in 2015, the lowest anywhere in Korea.

Despite such impressive results, support from the central government remains meager.

Under the amendments made to the Juvenile Welfare Support Act, these new youth rehabilitation centers receive 500,000 won ($441) per resident per month.

“Not all expenses, such as housing and meal plans, can be covered,” said Yim, “so we cover the other operating thanks to outside donations and our own money.”

But this does not discourage him.

“It’s obvious that crime must be met with punishment, but it does not last forever,” he said. “When it comes to the rehabilitation of children who are exposed to crime because they are excluded from households and schools, someone has to do it.”