Beijing orders all North Korean companies in China to shut down

Beijing orders all North Korean companies in China to shut down 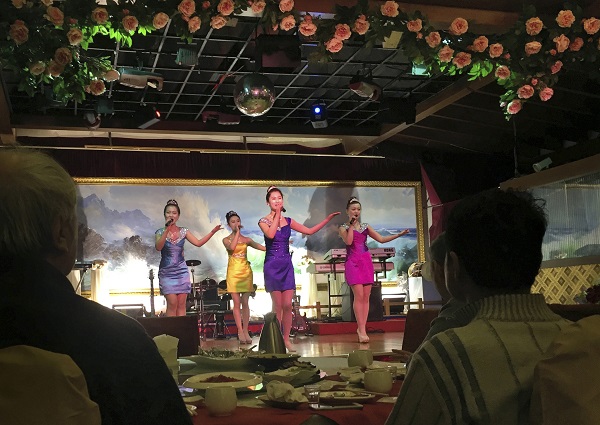 In this Feb. 18, 2016 file photo, North Korean performers entertain customers at the Okryugwan Restaurant in Beijing. Chinese news reports Thursday say the Chinese government has ordered most North Korean-owned businesses and joint ventures with Chinese partners to close under UN sanctions imposed over the North's nuclear and missile programs. [AP/YONHAP]

China ordered all North Korean companies operating in the country to close down within 120 days following the approval of the latest United Nations Security Council resolution, the Chinese Commerce Ministry announced Thursday night.

The decision is in keeping with the sanctions resolution unanimously adopted by the UN Security Council in New York on Sept. 11, following the North’s sixth nuclear test on Sept. 3, which aims to cut off revenue for North Korea’s nuclear and missile program.

North Korea-owned businesses will have to shut down no later than Jan. 9, according to the Commerce Ministry.
Overseas Chinese joint ventures with North Korean entities or individuals should also be closed.

However, companies that are approved by a UN Security Council sanctions committee, including nonprofit and non-commercial utility and infrastructure projects, are exempted.

After the adoption of UNSC Resolution 2375 earlier this month, China’s Commerce Ministry announced it would limit exports of refined petroleum products from Oct. 1. It also said it would ban imports of textiles from North Korea, and cut off exports of LNG and condensates to the regime.

Heather Nauert, spokesperson for the U.S. Department of State, said in a briefing Thursday, “Secretary Tillerson’s visit to China reaffirms the administration’s commitment to further broaden and enhance U.S. economic and security interests in the Asia-Pacific region.”
His visit precedes U.S. President Donald Trump’s visit to China in November.

She continued, “China has taken some great strides in recent weeks, and we look forward to China adhering to the UN Security Council resolutions and fully implementing all those resolutions.”

Nauert said, “We’ve seen some reports today about how they have committed to do just that,” indirectly referring to the Chinese Commerce Ministry announcement. “So I think the secretary will be thanking them for the steps that they’ve taken in that direction.”

Susan Thornton, acting assistant secretary of state for Asian and Pacific affairs, spoke of the pressure on North Korea, which depends on “heavy cooperation from international partners, especially Beijing,” in a U.S. Senate hearing Thursday.

Thornton added, “We are working closely with China to execute this strategy and are clear-eyed in viewing the progress – growing, if uneven – that China has made on this front.”