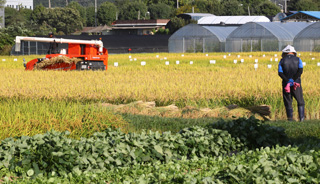 The autumn harvest is bountiful after a summer with no typhoons. Combine harvesters drive through golden fields ripe with rice, barley, beans and millet. They collect the plump grains and transfer them to a truck, where they’re off to the drying racks.

The harvest is all about timing, and farmers cannot stop working, even at night. The combine harvesters operate through the night, lit under a full moon.

People returning to their hometowns for Chuseok will feel gratitude seeing the golden waves of grain, but not many will think of the sweat that farmers shed to harvest it. We have long forgotten the preciousness of rice.

Until the 1970s, rice was very valuable. A supply shortage led to a government campaign to cut down on rice consumption. When cooking rice, each member of the family would eat one scoop less.

Rice saving days were designated, restaurants and lodging businesses were banned from selling food that contained rice twice a week, and teachers would check students’ lunches to make sure they had mixed grains.

Annual rice consumption per capita was 130 kilograms (290 pounds), but Koreans simply did not have enough rice.

Nowadays, rice is no longer in high demand. According to the Korea Rural Economic Institute, rice consumption per capita this year is projected to be 59.6 kilograms, the lowest in history. This translates to roughly 163 grams (5.75 ounces) of rice a day, a little more than one bowl of rice.

While there are many other food choices today and rice is not consumed as much, rice production remains at the same level due to failed agricultural policies. This year, the new administration is once again troubled with handling a surplus supply of rice.

Here, there is an unusual sign. Rice has long been the king of farming products, but the throne is likely to be taken by pork this year.

For the first time, the ranking in production value is expected to change. The Korea Rural Economic Institute estimates that annual pork consumption has rapidly increased to 23.3 kilograms per person, and since the price of pork is on the rise, pork could soon surpass rice in production.

Right now, 25 percent of pork is imported. Fortunately, Korea will soon join the Food Assistance Convention and provide 50,000 tons of rice as assistance to other countries annually.

Rice may have lost its throne in Korea, but hopefully, it will provide a warm meal to those suffering from starvation. The rice planted in the fields will be put to good use as we celebrate the Chuseok harvest festival.