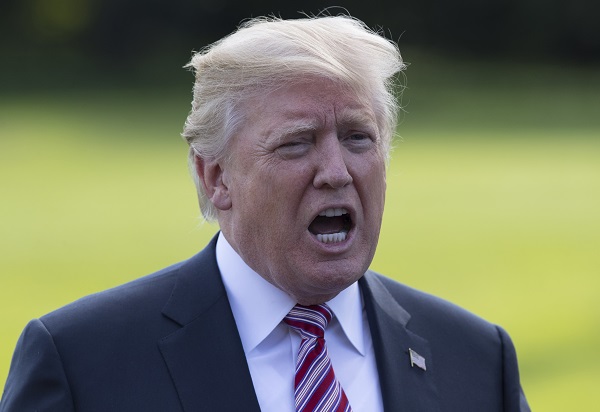 U.S. President Donald Trump undercut his secretary of state’s remark that the administration was in direct talks with the North Korean government, tweeting Sunday that Rex Tillerson was “wasting his time trying to negotiate” with Pyongyang’s leader Kim Jong-un.

The early morning tweets came just a day after Tillerson, who was visiting Beijing ahead of Trump’s planned trip to the region in November, told reporters for the first time that Washington had two or three direct channels with the North through which both sides communicate — although the State Department admitted Pyongyang has shown no indication it is interested in dialogue over denuclearization.

Trump, who last month engaged in a war of words with Kim and threatened to “totally destroy” North Korea if his country was forced to defend itself or its allies, alluded to his preference for a hardline approach in solving the crisis.

“I told Rex Tillerson, our wonderful Secretary of State, that he is wasting his time trying to negotiate with Little Rocket Man,” Trump tweeted, using his derogatory nickname for Kim. “Save your energy Rex, we’ll do what has to be done!”

The White House has yet to comment on the public cacophony, but The New York Times reported that Trump was privately described by advisers as “furious” at Tillerson for contradicting his public position that now isn’t the time for talks.

Heather Nauert, spokeswoman of the State Department, tweeted shortly after Trump that the White House was still open to a diplomatic approach in dealing with the North, though by hinting military options were available as well.

“Diplomatic channels are open for #KimJongUn for now. They won’t be open forever,” she wrote. “#DPRK will not obtain a nuclear capability. Whether through diplomacy or force is up to the regime.”
DPRK is short for North Korea’s official name, the Democratic People’s Republic of Korea.

Trump hasn’t shied away from disputing official statements relayed by his closest aides, often relying on Twitter to vent his personal opinions. But the latest all-out denial of efforts carried out by the State Department comes as geopolitical tensions continue to climb.

North Korean Foreign Minister Ri Yong-ho said last week in an address to the United Nations General Assembly that his country had the right to shoot down U.S. strategic bombers even if they weren’t in his country’s airspace because Trump had “declared war” by tweeting that the North Korean leadership “won’t be around much longer.”

Even then, the White House responded it was its focus to seek the peaceful denuclearization of the Korean Peninsula through both “the most maximum economic and diplomatic pressures as possible” at this point.

South Korea’s Blue House hasn’t made any remarks on Trump’s latest tweet. But on Sunday, after Tillerson mentioned Washington had two or three communication channels to Pyongyang, presidential spokesman Park Soo-hyun explained to local reporters that the U.S. government “believed it necessary to have quiet contact with North Korea in order to solve humanitarian issues, such as the release of American prisoners,” adding what triggered that basic stance was the recent death of Otto Warmbier, who arrived home in a vegetative state.

South Korea, which doesn’t have any dialogue channels with the North, was explained to be “cooperating closely” with the U.S. government to bring Pyongyang back to the discussion table, according to Park.

Direct communication between the two Koreas ended in February 2016, when North Korea cut off the channels after Seoul’s decision to suspend operation of the jointly-run Kaesong Industrial Complex.