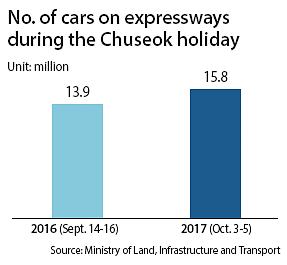 Close to 68 billion won ($59.3 million) was waived from millions of drivers during the three-day toll-free period last week, the government said on Sunday.

The Ministry of Land, Infrastructure and Transport reported that more than 1.58 million vehicles hit expressways nationwide between Tuesday and Thursday, when the government put in place a three-day toll free period, exempting drivers from paying toll fees worth 67.7 billion won in total.

It was the first time ever that the government has implemented such a policy to mark the 10-day holiday that began on Sept. 30 and ends today, prompting many to travel around the country and overseas, crowding both expressways and major airports across Korea.

The ministry said its toll-free policy contributed to an increased number of people travelling domestically, helping to boost domestic tourism and consumption to help the economy.

It went on to note that the amount of traffic to major domestic tourism sites more than doubled compared to last year’s Chuseok holiday.

In the far-flung southwestern county of Goheung, South Jeolla, 14,566 cars entered the small town known for its oceanic views, a 196 percent increase from last year’s Chuseok holiday, according to the government.

Kim Hyun-mee, the transport minister, said that the government will continue its toll-free policy for Chuseok and the Lunar New Year holiday, or Seollal, saying that such a policy will strengthen public services in the expressway sector.

The ministry also reported that the amount of traffic during the three-day Chuseok holiday this year increased by 13.9 percent to 15.8 million vehicles from 13.39 million cars last year. On Wednesday alone, the actual day of Chuseok, 5.88 million cars hit expressways, the largest daily traffic level ever recorded.

It also revealed that only one car accident was reported during the three-day period, which did not result in an injury. Last year, 16 accidents were reported with 21 injuries, all of them non-life threatening.

Thanks to the extended holiday period, tens of thousands of people also travelled overseas and returned in mass numbers as the end to the holidays approached. Incheon International Airport said it expected to see 116,000 inbound travelers arrive at the airport on Sunday, breaking the record number set just two days earlier at 110,400.