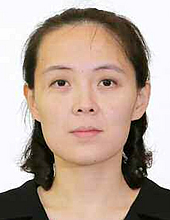 North Korean leader Kim Jong-un has promoted his younger sister to the ruling party’s Political Bureau, strengthening the family’s grip on the regime.

The decision was made Saturday during the second plenary meeting of the 7th Central Committee of the Workers’ Party of Korea, an annual gathering of Kim’s closest political aides to discuss domestic and international issues in addition to announcing any personnel changes. The previous plenary meeting was held in May 2016.

During the latest meeting, Kim Jong-un appointed his sister, Kim Yo-jong, to the Workers’ Party Political Bureau as a candidate (alternate) member, a role that does not have a vote but is allowed to participate in debates on key issues.

According to North Korea Leadership Watch, a research and analysis website on the North’s leadership, the power of a vote by a Political Bureau member was best illustrated during the December 2013 meeting that expelled Jang Song-thaek. Jang, Kim Jong-un’s uncle and the second-most powerful man in the regime until his arrest, was convicted of treason and executed with an anti-aircraft gun.

Last January, the U.S. Treasury Department added Kim Yo-jong and other party officials to its sanctions list over their links to “severe human rights abuses.”

As with her brother, it is unclear exactly how old Kim Yo-jong is. The U.S. government thinks she was born on Sept. 26, 1989, though the South Korean government believes she may have been born in 1987, according to a local official who spoke with the JoongAng Ilbo.

Ri Yong-ho, North Korea’s foreign minister, who threatened to shoot down U.S. strategic bombers even if they were not in its airspace and compared President Donald Trump to a “barking dog” in New York last month while attending the United Nations General Assembly, was made a full member of the Political Bureau.

Choe Ryong-hae, one of the most powerful figures in Kim Jong-un’s inner orbit, who is also the vice chairman of the Workers’ Party Central Committee, among many other posts, was also made a member of the Workers’ Party Central Military Commission on Saturday. The Military Commission, according to North Korea Leadership Watch, exercises joint command and control over the country’s conventional military forces and internal security agencies with the State Affairs Commission. It also debates and approves military policies, munitions orders and defense acquisitions.

In an address delivered to party members, Kim Jong-un was quoted by the state-run Korean Central News Agency as having affirmed the “Byungjin Nosun” policy, which relies on the parallel pursuit of economic and nuclear weapons development. Kim stressed that the party “should invariably keep to this road in the future, too.” North Korea’s nuclear weapons, Kim added, were a “precious fruition” for defending the destiny and sovereignty of the country from the “nuclear threats of the U.S. imperialists.”