Kim Yong-ho wears many hats: He has been a fashion photographer, an art photographer, an art director, and as of late, he is an installation artist with his “Modern Boy” series, which he started in 2013. His white robot figures are now on display at the Street Museum in central Seoul, which opened a Modern Boy exhibition on Sept. 21 that will run until Dec. 31. 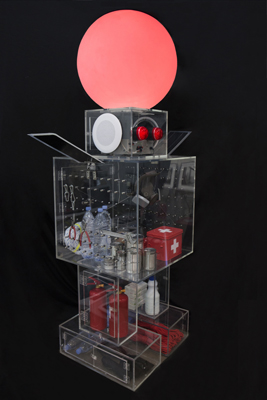 Kim Yong-ho’s latest work is a human-sized “Modern Boy” with useful gadgets inside, such as a radio and fire extinguisher to be placed in public areas for people to use. [KIM YONG-HO]

The “Modern Boy” series began in 2013, at Seoul Station, when Kim installed 202 white figures that looked like square-shaped robots the size of an adult’s hand, with bright light bulbs affixed to their heads, for the “Dream Society” exhibition that was held in April and May of that year. The minimal figures are not the most striking pieces one may see in a gallery, but rather look like pretty lamps made through mass production at a factory.

“Modernism started with standardization through the industrial revolution, which inevitably led to uniformity,” said Kim. “But that’s not a bad thing. Because it brought us the convenient life we’re living right now. I intended the minimal look with ‘Modern Boy’ and refrained from using decorative additions, because that was the root of our rich, contemporary society.”

The latest exhibition features over 70 figures which have been recreated by various artists and companies. With models newly designed in different colors and patterns, visitors can see for themselves the true “Modern Boy spirit.” Kim sat down with the Korea JoongAng Daily to elaborate on his work.

Q. So, what exactly is the “Modern Boy spirit?”

A. The “Modern Boy” is any person in this modern world that shines on their own. That is, that they live their lives with their own philosophy, and help others around them in the process. The people who have changed the world in their own ways are all modern boys. Like Steve Jobs and Mark Zuckerberg; they’re the most famous modern boys.

Why did you put light bulbs on their heads?

I put the bulbs on for a number of reasons. Firstly, it’s a literal message that people have to become bright and shine on their own to make the world a brighter place for everyone. The second reason is that the filament and the shape of the bulbs are an homage to [Thomas] Edison, who invented the light bulb. Lastly, if you have a modern boy next to your bed and leave it on through the night, it feels as if they’re protecting you through hard times and lonely days.

Why did you name your artwork “Modern Boy?”

The phrase “Modern Boy” seems to have a bad connotation in Korean society, because of the movie “Modern Boy” (2008), where the main character was a pro-Japanese opportunist. But the year 1914, with the outbreak of World War I, gave birth to modernism and broke the old habits of history. I want us to remember that the modern boys were the people who opened up a new chapter in the society, and I hope that my “Modern Boy” series can bring back the “Modern Boy spirit” to the people.

How did you go from being a photographer to what you are doing now?

There are so many beautiful women in Korea, but the Korean idea of a beautiful woman is very Westernized and very much the same for everyone. I thought about where that came from, and came to the conclusion that it started in the early 20th century, when Korea opened its doors to Western civilization and modernism. It’s become much different now, but the prototype of the Korean beauty and the contemporary Korean ideology comes from that era.

Do you consider yourself more an artist or a photographer?

I consider myself both, because the boundaries between the genres have become vaguer these days. There’s actually no point in saying I’m one thing and not the other. Everyone and everything coexists in a way that if you try, you can become anything you want. I just try to use whatever means possible to get the message across to people. I still do take photographs, as well.

For instance, I have a photo book coming out soon, called “Modeun Modern World,” which I made in collaboration with Hyundai Motor. What I did in the book is take photos of different places around the world of things that have been created at different times but carry similar roles. Through the photos, we can see that the fruits of the modern world aren’t so different from what was created centuries ago, and that they carry the same essence.

What do you ultimately want to achieve with “Modern Boy?”

At the end of the day, what I want to do is to give the message that we are all modern boys who shine brightly, and help those secluded from society realize that they’re not alone. As long as the people carry the “Modern Boy spirit,” then I’m fine with however they interpret the appearance.