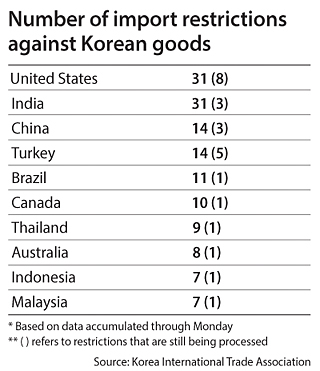 The United States has become the country with the largest number of import restrictions against Korean goods, a Korean trade group said Wednesday.

According to the most recent data from the Korea International Trade Association, there are 31 restrictions against Korean goods, with eight of them still in the process of being finalized by the U.S. Department of Commerce. The restrictions range from antidumping tariffs to safeguard measures that limit the import of certain products until the market stabilizes.

Until the most recent report, India had the highest number of restrictions against Korean products, with 28 enforced and three in the process of finalization. The United States is now tied with India.

The total number of import restrictions that Korea faces around the world is 190, with 150 already in place and 40 being processed in 27 countries. The United States’ restrictions account for about 16 percent, and most of them are in steel and metal products.

The United States has been toughening measures against Korean goods for the past few years. At the end of 2015, there were 19 import restrictions. At the end of last year, it had increased to 23.

This year, eight more have been added, though there could be more restrictions being considered that the Korea International Trade Association isn’t aware of, a spokesperson from the association said. The organization collects restriction numbers manually through the trade centers they operate around the world.

While steel and metal products account for the most restrictions, at 23 percent, the United States has also expanded restrictions on chemical products, garments and electronics.

Last month, the Department of Commerce began looking into antidumping tariffs on polyethylene terephthalate, or PET, which is used to make plastic bottles and of which Korea is a major exporter.

The department has also pointed to Korean-made solar panels and washing machines as possible targets of safeguard measures, claiming the imports have damaged sound competition in the American market.

“After the global financial crisis in 2008, emerging countries as well as major trade partners like India and the United States have been embracing protectionist policies,” Rep. Kim Byung-kwan, a Democratic lawmaker who serves on the National Assembly’s trade committee, said Wednesday, “and our government’s role has grown ever more important to protect Korean enterprises from import restrictions.”

Based on the data from the Korea International Trade Association and Ministry of Trade, Industry and Energy, the United States has imposed on average 1.1 import restrictions a year between 1986 and 2012, before the two countries inked a free trade agreement. But, Kim noted, after the deal was signed, the figure increased to an average 6.4 cases per year.