Trump given ‘range of options’ for North

Trump given ‘range of options’ for North 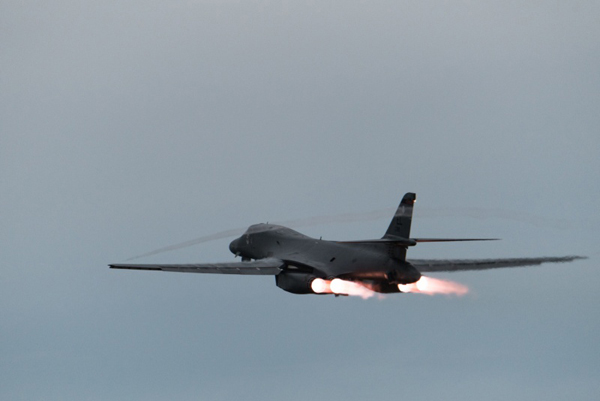 A U.S. Air Force B-1B Lancer takes off from Andersen Air Force Base in Guam to fly sequenced bilateral missions with two Japan Air Self-Defense Force (JASDF) F-15s and two Republic of Korea Air Force F-15Ks in the vicinity of the Korean Peninsula on Tuesday. [YONHAP]

“The briefing and discussion focused on a range of options to respond to any form of North Korean aggression,” the White House said through a statement afterward, “or, if necessary, to prevent North Korea from threatening the United States and its allies with nuclear weapons.”

This statement implied military options, which could include a preventative war plan or pre-emptive strike.

Trump had a luncheon with State Secretary Rex Tillerson and Mattis on the same day, which comes as the president has faced backlash by lawmakers for undercutting diplomatic efforts through his rash rhetoric. 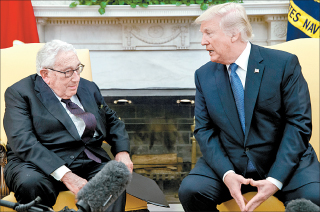 U.S. President Donald Trump, right, speaks during a meeting with former Secretary of State Henry Kissinger, left, in the Oval Office of the White House on Tuesday.[AP/YONHAP]

“I’m here at a moment when the opportunity to build a constructive, peaceful world order is very great,” said Kissinger, who served under the Richard Nixon and Gerald Ford administrations, at the beginning of his meeting with Trump. “And the president is leaving on a trip to Asia, which I think will make a big contribution to progress and peace and prosperity.”

Kissinger has previously proposed to White House officials a pullout of U.S. troops from the Korean Peninsula in return for complete resolution of the North Korean nuclear problem, namely to allay China’s fears. In a Wall Street Journal op-ed in August, the 94-year-old former secretary emphasized understanding between Washington and Beijing as a “prerequisite” and stressed Japan and South Korea’s roles in resolving the North Korea issue.

The president kicks off his first trip to the Asia region from Nov. 3 to 14, which would take him to Japan, South Korea, China, Vietnam and the Philippines, as well as Hawaii. The president is expected to seek to strengthen the international resolve to confront the North Korean threat during this trip to Asia, while also tackling trade deals.

Trump called Kissinger, who has advised him on foreign policy matters since his presidential campaign, a “man of immense, talent, experience and knowledge,” who he has “great, great respect for.”

When asked to respond to Republican Sen. Bob Corker of Tennessee’s remark that the president is leading the nation on a path to World War III with his reckless threats, Trump replied, “We were on the wrong path before. If you look over the last 25 years through numerous administrations, we were on a path to a very big problem - a problem like this world has never seen.”

He continued, “We’re on the right path right now, believe me.”

Despite reports of internal feuding between the president and his state secretary, Trump told reporters he still has confidence in Tillerson, adding, “I don’t believe in undercutting people.”

Corker and some U.S. lawmakers have in recent days expressed concern that Trump undermines Washington’s diplomatic efforts through his threatening rhetoric, which could lead to miscalculation, especially over sensitive issues such as North Korea’s nuclear problem.

Over the past month, Trump threatened to “totally destroy” North Korea while addressing the UN General Assembly, shot down Tillerson’s diplomatic efforts, tweeting that the state secretary was “wasting his time trying to negotiate” with the regime’s leader and ominously alluded before reporters to a “calm before the storm.”

“Diplomacy is the preferred approach,” said Heather Nauert, spokesperson of the U.S. State Department, in a press briefing on Tuesday, adding this was emphasized by Tillerson, Mattis and the White House. “That’s our first line. We’re continuing with that.”

Regarding Trump’s critique on Twitter Saturday of the failure of the past 25 year of negotiations and his claim that “only one thing will work” in dealing with North Korea, she said, “I think what the president was talking about is some of the past actions have not worked, where we have just talked, and North Korea hasn’t lived up to some of the things that it was supposed to. We would give things to North Korea in exchange for good behavior and that good behavior, in fact, never really materialized.”

On Washington taking a military option, Nauert said, “No one wants to go to war with another country ... We want North Korea to give up its illegal nuclear ballistic missile weapons and testing and all of that. We want a peaceful Korean Peninsula, and the world agrees with us on this.”

She added, “We’ve seen success on the issue of North Korea, as we’ve been moving toward our peaceful pressure campaign.” She said conversations with U.S. friends and allies indicated that such a campaign “is starting to have an effect, adding, “We’re pleased with that.”

The New York City Bar Association said on Tuesday it sent an open letter to Trump last week that stated, “In the absence of an actual or imminent attack on the United States,” the president “has no authority to commence a war in ‘anticipatory self-defense,’” which it said is sometimes incorrectly called a “pre-emptive war,” on another country “without prior congressional approval.”

John Kiernan, the president of the association, also wrote, “Although the challenges posed to world peace by the current leadership of North Korea are real, bellicose threats and displays of military prowess by that nation do not constitute the type of imminent attack that might justify unilateral presidential action to order a military attack against that country.”

The Lancer bombers departed from Anderson Air Force Base in Guam and entered the Korean Air Defense Identification Zone (Kadiz) around 8:50 p.m. on Tuesday, according to the South Korean Joint Chiefs of Staff Wednesday.

This comes just 17 days after the U.S. military sent B-1B bombers to the peninsula on Sept. 23. A Blue House official said on the deployment of the B-1Bs that “South Korea and the United States agreed to the rotational deployment of strategic assets, and the operation was carried out under such a background.”

The U.S. Navy’s nuclear-powered Los Angeles-class attack submarine USS Tucson, known for its stealth and mobility, arrived off the southeastern coast of Korea in Jinhae, South Gyeongsang, on Saturday.

The 360-foot advanced submarine, based in Pearl Harbor, Hawaii, is capable of anti-submarine warfare, anti-surface ship warfare, strike, surveillance and reconnaissance, according to the U.S. Pacific Command.