Man acquitted after half a century

Man acquitted after half a century 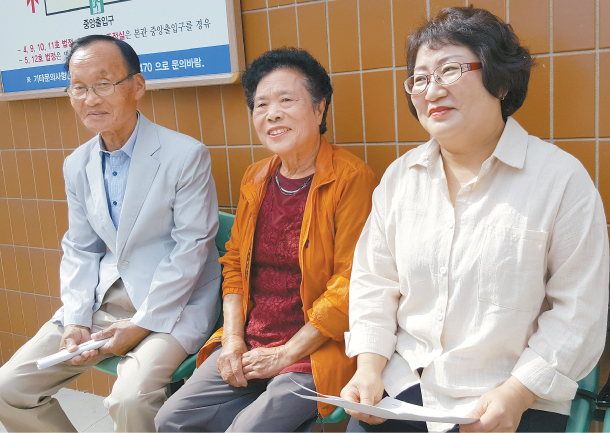 Park Choon-hwan and the relatives of two other fishermen who served jail time after being falsely accused of being communist spies are seen sitting happily after Jeonju District Court acquitted the three fishermen of the charge of violating anti-communist laws and Fisheries Act in Jeonju, North Jeolla, on Wednesday. From left, Park Choon-hwan, Huh Tae-geun’s wife and Oh Gyeong-tae’s daughter. [YONHAP]

JEONJU - The Jeonju District Court announced Wednesday it acquitted Park Choon-hwan of engaging in communist activity and violating the Fisheries Act, 49 years after his kidnapping by North Korean patrollers during a fishing trip.

Park’s nightmare began in May 1968, during the height of the Cold War, when he and a couple of crewmates set sail in waters near South Korea’s northwestern-most Yeonpyeong Island to catch fish. Park, only 22 years old at the time, did not expect to see the trip end with North Korean patrol guards seizing his crew’s humble fishing craft and dragging him and his crewmates North across the border.

Though Park and his companions were released by their North Korean captors after four months, Park’s life of imprisonment was only just beginning. Instead of welcoming his safe return, the staunchly anti-communist South Korean government sentenced Park to 18 months in jail on charges of communist activity.

Not long after his release, however, police in his hometown in Gunsan, North Jeolla, detained and tortured Park until he made false testimonies of his allegiance to North Korea in 1972. While detained, Park even bore false witness against one of his friends and claimed they had “read and discussed together about North Korea,” landing his friend eight months in jail. The same year, Park was sentenced to seven more years on charges of being a communist spy.

Left only with the label of “communist spy” and fractured bones that served as a constant reminder of his torture, life after prison was less than kind to Park. After his release in 1979, Park set out for Chungcheong in the hopes of getting away from the unwanted attention of neighbors as well as the guilt of having handed his innocent friend over to police. But with his body and mind both weakened by his experiences, Park only managed to find odd jobs and has been supporting his family with humble earnings.

According to Park’s lawyer, about 1,500 South Korean fishermen have been punished by the South Korean government for having communist leanings upon their release by North Korean kidnappers. Out of these, only about 10 have been cleared of convictions. Ironically, the anti-communist law that put so many innocent South Koreans in jail is now defunct, and most of the victims, as well as police who tortured them, have died of old age.

Park and two former crewmates have now been acquitted of violating the anti-communist regulations and Fisheries Act, for which Park served eight months. The judge who was involved in the retrial explained that “the evidence that had found them guilty was falsely fabricated through torture and coercion, making them invalid.” Park’s crewmates were unable to hear the good news, however, having already passed away. Previously, through a 2011 retrial, Park had already been acquitted of the charge of espionage, for which he had served seven years in 1972.

When asked to comment on the results of the latest retrial, Park said, “I was found to be completely innocent, but it’s unfair since I’m so old.” He added, “I feel very bitter toward the government and I do not want to return to my hometown.”