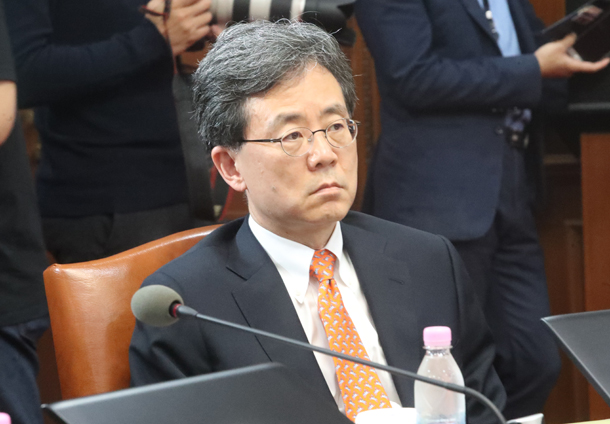 Trade Minister Kim Hyun-chong participates in a cabinet meeting Tuesday after returning from a trip to Washington to discuss issues involving a renegotiation of the Korea-U.S. Free Trade Agreement. [YONHAP]

If Roh Moo-hyun hadn’t become president, if he hadn’t pushed for the FTA despite opposition and if he hadn’t promised U.S. President George W. Bush to import a reasonable amount of U.S. beef within a reasonable time, the FTA wouldn’t have been signed. He did three things that no leftist Korean politician would do: pleasing the United States, breaking the factional rhetoric and upsetting farmers. As a result, the alliance was reinforced, the economy improved and the nation was saved.

It must have been a painful decision for Roh as an individual. He explained his thoughts in a statement released on the day the FTA was signed — April 2, 2007. He said, “The FTA is not a matter of politics or ideology. It is a matter of living. But some criticized that Korea was being pressured by the United States and selling the country.”

After 10 years, the Korea-U.S. FTA is under renegotiation. The partner is U.S. president and master of deal-making, Donald Trump. This time, the negotiation will be much harder than dealing with the Bush administration. Then, Korea led the negotiation, but now, Trump is holding the sword by the hilt. The surrounding circumstances are not favorable, either. The North Korean nuclear threat is affecting diplomacy, security and economy. Korea doesn’t have much wiggle room, and the negotiation is not going to be easy. Opposition parties and farmers are already making a fuss before the negotiation even begins. They criticize and worry that Korea will be pressured to concede everything.

If this is a battle we cannot win no matter how hard we try, we need to change the frame. This is where we need to reverse ideas. By nature, powerful nations prefer bilateral negotiations to exert influence. In order to respond to powerful countries, smaller nations must unite. This is how multilateral negotiations work. We cannot bring the United States into the WTO or Group of 20, as Trump rejects it.

The last remaining move is the Korea-U.S.-Japan FTA. It can offer justification and practical interest to Trump. Trump unilaterally scrapped the Trans-Pacific Partnership, a legacy of Obama, and withdrew from the Paris Climate Agreement. There is domestic criticism that the United States was losing international leadership. The Korea-U.S.-Japan FTA will be effective in checking on China as much as TPP. Moreover, it will be Trump’s accomplishment, not Obama’s. Japan and Korea have the second and sixth largest trade gains against the United States, and Trump will be able to save his face after advocating “America First.”

It will also bring considerable gains for President Moon Jae-in, as it is a great opportunity to reinforce the tripartite alliance. Also, including Japan, whose industrial structure is similar to Korea’s, would reduce any backlash. Ewha Womans University Prof. Choi Byung-il said that Abe won’t be able to refuse easily, as he had already agreed to the TPP, and it would also be a preemptive move for the fourth industrial revolution and digital economy. A free trade agreement with Japan can only be accomplished by a liberal president, and now is the good time. The second miracle awaits us. The opportunity will arise when Trump visits Korea in November.

Moon needs to step in while he can and convince Trump with a reversal of ideas. Mentioning the classic rhetoric of the mutually favorable FTA won’t work. Late President Roh Moo-hyun’s statement has the answer. He said, “This is a decision made despite political loss.”